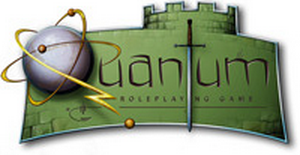 Sure, Far West is by far the most overdue Kickstarter on my list, but I'll give Gareth a pass for legit health reason this time around.

And yes, Dwimmermount has become the poster child of "how not to run a Kickstarter for someone else".

Myth & Magic is certainly the one most likely to ship via imaginary packing slips.

Nystul is still in a world of his own.

But Quantum? Quantum holds a special place in my Kickstarter heart.

The past nearly two months have been awful. I've struggled mightily to get the final art pieces in, even going so far as to seek additional art help for Hugo with no positive results. I've hesitated to discuss art struggles as my own writing and design struggles have been significant, but I feel all struggling aspects of this game now need to be discussed, not just my own. At this point, I may have to release the book missing some of the monster art and without a poster map. I seriously hope this doesn't happen, but I can't wait for the art any longer.

Financially, I reached the wall where continuing to work on this game without a paycheck is not possible. I then had to spend time looking for, finding, and then accepting a new part-time job. It's not exactly the sort of job I want to shout to the roof tops, but it pays the bills. It also takes a great deal of time away from what I want to be working on (the game), but after the "busy period" I'm in right now at work ends in a few weeks, things to will settle back down to where I can crush the remaining chapters.

Colleen is the bright spot in these last two months. She's banging out some amazing layout work despite working a full time job. Her work is amazing and I think you'll be equally impressed.

My goal right now is to have the entire game out of my meddlesome hands by Turkey Day with the final book, at minimum, released as a PDF by the New Year and well on its way through the printing process with our overseas printers.
We are very close to being done and have unfortunately been very close for a while now.

I'm back to frequent updates again and I'm sorry for the lack of updates.

See the date above? September 29, 2013. Nearly 5 months ago. I'm glad Josh returned to something that he considers "frequent updates" or it might have been 6 months since his last update.

Yes Josh, I'll drink my next beer with a toast for you. Amazing job not doing your job without even giving us a stroke job.
Posted by Tenkar at 5:33 PM