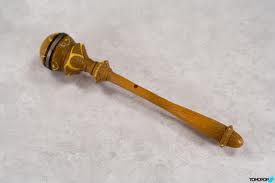 I have a huge appreciation of The Dungeon Dozen. It is many layers of awesome goodness. While it it probable many will not use the tables is written but instead use the site for inspiration, the idea of rolling on the table is damn fun.

On most days I don't have ten things inspiring me, let alone a dozen. Seven things every couple of days? Perhaps. An opportunity to use the ugliest die available? It's got to be awesome!

1 - Rod of Ungodly Godliness - Using a charge allows one to change their visage to almost godlike - causes fear in creatures 4 HD or less. Higher level creatures may suffer a morale penalty

3 - Rod of Light - a single charge causes the rod to emit light like a Light spell. Two charges will emit Missiles of Light (as Magic Missile Spell)

5 - Rod of Fishing - no charge needed to use as a fishing pole. One single charge will produce enough fish to feed four people for one day. Fish still need to be cleaned and gutted.

6 - Rod of Awareness - one charge will allow the rod to be set in the ground. It acts like a sentry for the next eight hours, and will silently warn it's owner of any creatures larger that 6" tall that come within 30' of the activated rod

7 - Rod of Spoiling - when activated, the rod will spoil food, wither vines, rot fruit, sour wine and beer. Radius is 20; per charge spend, maximum 100' per usage.