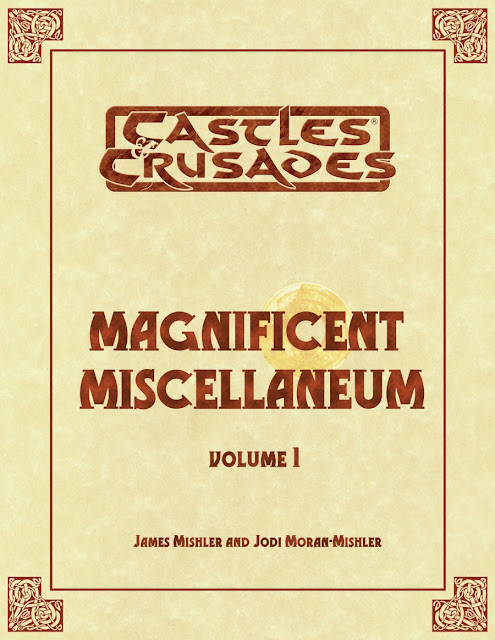 I got the following email from the Trolls over at Troll Lord Games earlier today (just gonna snip the relevant part):

But what I wanted to talk to you about today was our new release: The Magnificent Miscellaneum by James Mishler.  Every issue of this ongoing series of supplements contains a magical mix of wondrous wizardry, potent priestcraft, monstrous menaces, mystical magic items, and more. With a touch of humor and classic gaming goodness, the Magnificent Miscellaneum is a collection of various materials for your Castles & Crusades, Amazing Adventures, Harvesters, Tainted Lands, Star Siege, and Fields of Battle games, for both players and game masters. We may have sold 12,000 copies of the Players Handbook and released five separate printings, but it doesn’t mean we all can’t use more! The Crusade goes on!

This first issue includes three new spells for Castles & Crusades, a crazy and weird monster in classic B-Movie style from the Cold Depths of Space, five new monsters in the quick and easy format used in the Castles & Crusades White Box Set, and a mysterious NPC for Amazing Adventures.

Haven't seen hide nor hair from James since his self publishing went south. There was never a question of the quality of the work James produced - it was only the highest quality stuff for Castles & Crusades - higher quality than the Trolls were producing at the time.

It's a shame, as I suspect James would have done well in the Kickstarter Era, as it would have covered his cash flow and paid for stuff in advance. Ah well.

So, how is The Magnificent Miscellaneum?

It's pretty good. I like the spells and the flavor text - powerful low level spells with a decent amount of downside or high cost. The new creatures? Awesome flavor. Not sure how much of a chance I'd get to use them, but I love how James' mind works. The character for Amazing Adventures? eh. I don'y play the game and it isn't going to convert so well to the OSR style game of choice.

Is it worth a buck twenty five ($1.25)? Easily. Even at six pages, theres some good stuff here.

My one question - why is such a short PDF weighing in at 13 MBs? Some tablets dont have ever expanding memory, and nickels and dimes add up.

Email ThisBlogThis!Share to TwitterShare to FacebookShare to Pinterest
Labels: Castles and Crusades, Reviews