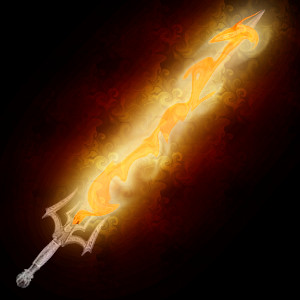 The Flaming Sword of Za-Mahn is a magical two-handed sword. It appears to be a plain sword until it is wielded with two hands, at which point yellow and orange flames lick up and down it's blade. The sword sheds light as a torch while aflame and can be used to light things on fire in much the same way. The flames from the sword do not smoke nor foul the air.

In game terms, it is +1 to hit, +1d4 damage. The extra damage is related to it's flaming ability, so resist fire reduces the extra damage by half and creatures vulnerable to fire take 2d4 extra damage instead of the standard 1d4.
Posted by Tenkar at 1:33 PM