It's not often that I look at a Kickstarter that is AMAZINGLY successful and still find myself scratching my head. The Guide to Glorantha is one of those rare projects. It's goal was an impressive one for an RPG project - $36,500. It currently sits at $155,943 with just under 800 backers, which means it averages nearly $200 per supporter. 8 days left in the Kickstarter too.

Can we all say a collective "Holy Shit!"

Now I know why Design Mechanism didn't get the rights to Glorantha when they got the rights to RuneQuest. It appears that the setting is where the money is.

I have Pavis and Big Rubble from Choasium during the RQ2 days and they were simply amazing. Better then what others were putting out back then and it was far from the standard fantasy world.

So, from a personal standpoint, I find this Kickstarter fascinating and I am sorely tempted to participate in it, but apparently you need to refer to a spreadsheet to figure out what the different levels of supoort give. No. Really, you need a spreadsheet! Look: 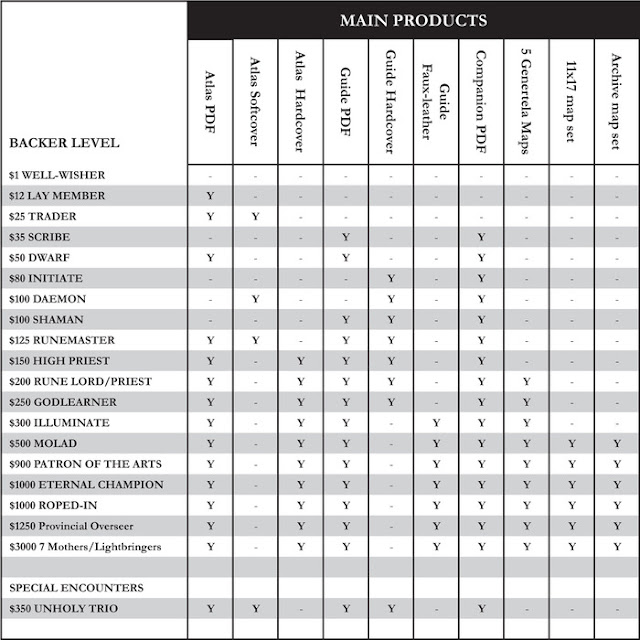 I think I'd need to support at $125 to get what I want in print and PDF. I put down at least that much for Dwimmermount, but I expected to get use out of that (not the vinyl play matts - WTF I wanted those when I game on G+ Hangouts I'll never understand). These I'll read and put on a shelf.

I guess I have 8 days left to decide if I want in on this.

I think if I had stuck with Glorantha over the years, I'd probably be in at $500. Thank God I didn't stick with it ;)