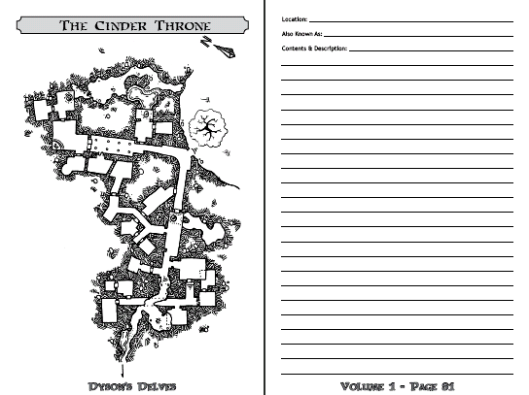 If you follow OSR gaming at all, you've come across Dyson Logos' maps. To say that they are amazing is an understatement.

Dyson has released his work in print - $20 for softcover, $40 for hardcover.

"Dyson’s Delves is a 6″ x 9″ 149 page book of adventures and maps for your old school game. Five full adventures from the site begin the book, followed by 44 dungeon maps each with a lined page opposite it for the owner to stock and key the maps or just to write notes about the dungeon for his or her own game.

Both editions contain reformatted versions of the classic mini-mega dungeon “Dyson’s Delve”, “The Charmed Grotto”, “Ruins of the Gorgon”, “The Worm’s Gullet” and “Erdea Manor”, followed by 44 unkeyed maps. The Limited hardcover edition contains an additional adventure at the back of the book, “The Twisted Halls of Mornard’s Revenge” which is designed for near name-level adventurers".

That's a crapload of Dyson's maps for a damn good price.

I opted for the softcover, as I think I'd cry if I found myself keying a dungeon in the hardcover ;)

Thanks to James Aulds for the heads up and the $20 hole in my paypal account ;)
Posted by Tenkar at 8:32 PM

Email ThisBlogThis!Share to TwitterShare to FacebookShare to Pinterest
Labels: maps