1e Session Recap (Part 1) - Whereupon the Party Finds Many Rats, But No Coppers 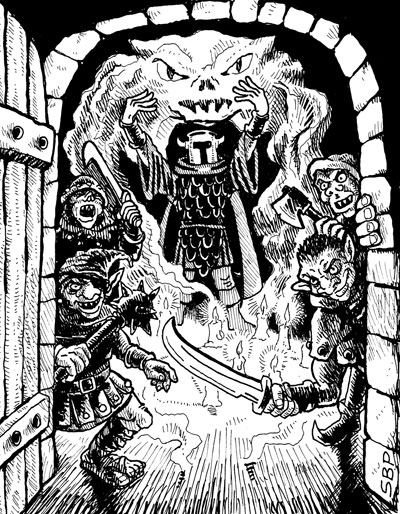 So, last night I kicked off my 1e / OSRIC campaign. It's the same players from my old ACKS campaign and Ambition & Avarice play test sessions for the most part. To make up for the reboot, I awarded them half the expo earned (approximately) during the ACKS Campaign, which gave everyone  8k in expo. I'm using a heavily modified DCC #27 to get the ball rolling.

Janos, an Elven Cleric4 - CN (I opened the classes up as per 2e)

Rastan, a Human Fighter3 - NG (the HP tank with exceptional Strength - name may ave changed - it was in flux ;)

So, the party wakes up chained to a cell wall via next collars. They have some vague memories of being in Tenkar's Tavern, in the Town of Tenkar (BareBones RPG Keranak Kingdoms Fantasy Setting). It was "Adventurers' Night" at the Tavern, when adventurers eat and drink for half off as paying patrons attempt to ply deals. A young fop named Lawrence was striking a deal with them when another adventuring party demanded the contract. Within minutes, the Tavern was laid to waste (not for the first time). Glabe remembers seeing the pointy end of a spear protruding from his chest, and suspects he died when it all faded to black. The others remember being on the losing end of the fight and falling unconscious, or worse.

Upon awaking, Rastan tested his chains and was able to pull them loose from the wall. The resulting hole revealed the sound of rushing water behind the wall. With some work, the rest of the part was freed, and it was decided to cast a silence spell so they could complete opening the wall up enough to escape through if necessary. They knew there were was someone on the other side of their cell door, and they wanted to be as quietly as possible. Besides, they were clothed only in prisonwear, without armor, weapons or other quiptment.

With the wall opened enough to view the unground river below, the party awaited their jail keeper, on the assumption someone needed to provide them with food and water. They were correct, and after waiting an undermined amount their jailor, a well times sleep spell took the wererat out after he opened their cell door.

The attempt to charm him failed, and what little info he was able to provide the party failed to make much sense. In the short of it, they disposed of him so he wouldn't be a possible issue later.

The elvin MU/T was the first to lower himself into the river. I wasn't sure if he had a death wish or now, but he saw the hints of a shore and a dry cave and decided to swim for it. The rest of the party decided to us the chains from the jail keeper's / torturer's room to tie themselves off and avoid being washed down river. It's nice to know the whole party isn't suicidal.

The party made their way the cave tunnel to a small lake with a whirlpool at the center - this was obviously fed by the river they had successfully traversed. The dwarf stopped to inspect the racks and stones at the shore before pressing on - he wanted something he could throw. Instead, he found a waterproof scroll case washed up among the rocks. The were some spell scrolls for the magic-user and a coded treasure map (and future adventure seed).

Proceeding to the far side of the sure the party came to a winding tunnel system, roughly 4' high and 4'.  It smelled of death, decay and poop. Rat poop!