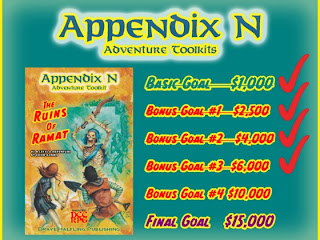 Brave Halfling posted an update to the Appendix N Kickstarter they have running.  I'll do a basic summary, then I'll copy and paste the gist of it.

If you kick in $30, you get two copies of all of the print adventures, plus you get the first 8 Appendix N Adventure Options releases.

Wow! Three weeks ago, if you would have told me we would be close to hitting the fourth Bonus Goal in less than two weeks, I would not have believed you! Thanks you so much for your support in helping launch this new line of digest adventures in support of the DCC RPG! As another way for me to say, “Thank you,” I will be sending every supporter a free pdf detailing the god Ramat - his faith, teachings, rituals, spells and holy items.

This will go out at around the same time as the first two modules ship.

Lots of folks have asked me why I set the “sweet spot” for this Kickstarter so low ($20) and how could I possibly be making any money off of it? That is a fair question and I would like to answer it here. In my 4+ years of hobby publishing I have learned a few things by trial and effort, by researching the industry, and by making many mistakes. This new line is exactly the kind of products I love to create! And this Kickstarter will enable me to create each of them in the quantities and at the level of quality I desire for them. For the first couple of years of BHP, I was able to fund projects out of my own pocket. But like so many people in our culture, I ended up being unemployed and underemployed for 13 of the last 24 months - and that reduced my ability to fund new projects. On the bright side, as our budget became tighter and tighter, my family and I have ended up spending more and more time playing games around the kitchen table. I know other families have as well. Times are still hard for many people. Each of these digest modules will retail anywhere from $5.95 to $8.95 (depending upon their size) and provide a session or two of gaming. That is very affordable. My goal for this Kickstarter has never been about making as much money as possible. Honestly, I am not sure using Kickstarter that way is very ethical. No, from the beginning, my goal has been to raise enough money to get this new line of products going and I am more than happy to provide all the modules and bonus goals in this Kickstarter to supporters at a greatly reduced rate (compared to the retail price) as my way of thanking them for providing me with the funds to release these modules in the quantities and at the level of quality they deserve.

With that said, I know that everyone wants to get as much for their money from this Kickstarter as possible and that means hitting as many Bonus Goals as possible. Folks know this kickstarter is already a fantastic deal and the current sweet spot for most supporters is $20. As a way of helping us hit the last two Bonus Goals, I will give copies of the first 8 Appendix N Adventure Options pdfs (detailed below) to every supporter who pledges $30 or more! This includes anyone who upgrades their pledge to $30 or more too.

Appendix N Adventure Options pdfs:
Something I did not even consider when I was putting together this Kickstarter is how BHP will also be supporting the DCC RPG with little pdf releases (in addition to the modules listed in this Kickstarter). This line of pdf-only products is called, “Appendix N Adventure Options.” BHP began as a pdf publisher putting out many pdfs in support of Labyrinth Lord, and I am going to do the exact same thing in support of the DCC RPG. Indeed, I have what I think are some unique (and very DCC RPG) takes on the optional character classes of ranger, bard and paladin. In addition, I also have an entire, pantheon of gods to be released with detailed descriptions of their faith, followers, rituals, teachings, major and minor places of worship, spells and holy items, etc. The gods of this pantheon include: Rhuynda (Withered Old Witch), Thaxson (The Just), Glenys (Wise Mother), Oska (The Goat god), Olmina (Sister Sea), Wurdyn (The Old Man), Miven (The Shameful), Shorn (The Scholar) and Valtor (The Mighty). Plus, other releases will include new magic-user spells (with single-page sheets), magic rituals, unique magic items, additional patrons, etc.

Again, thanks so much for your support and I look forward to serving your DCC RPG needs as my preferred customers for the next many months!
Posted by Tenkar at 5:04 PM