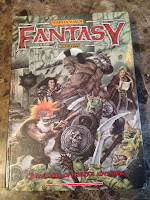 I remember hearing about Warhammer Fantasy Role Play, probably in issues of White Dwarf.  I wanted this badly!  My sister got it for me for Christmas and hid it under her bed.  I found it and read most of it before I even got to unwrap it.  I was a bad brother (but I have an excellent sis). 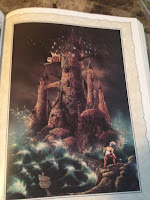 We played the shit out of this game.  Regretfully we never finished the whole Enemy Within Campaign, but that was the result of a TPK.  Apparently one shouldn't run around casting Fireballs while carry vials of oil.  That was the first midway completed campaign TPK I ever GM'ed, and although folks were disappointed that the campaign was over, the stories of that TPK were told for years later.

You know what, I'm going to steal some stuff from this book for my ACKS campaign.  Gotta keep my players guessing ;)
Posted by Tenkar at 8:21 PM

Email ThisBlogThis!Share to TwitterShare to FacebookShare to Pinterest
Labels: games from the basement, Warhammer