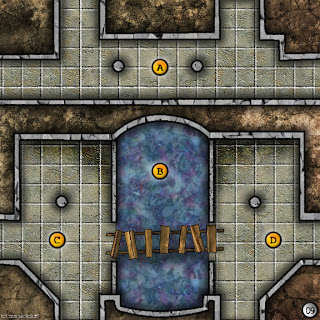 When Charles Jaimet raised me yesterday and mentioned about using Google+'s On Air feature to allow for others to watch us live using Tabletop Forge and record for later, I was all for it.  No biggie - I do monthly training sessions for 30 to 40 cops at a time these days, and after the first time or two, it's no big deal.

Then Charles asked me to use some of Matt Jackson's geomorphic battle maps in last night's game and I said sure, no problem.

The only problem is I didn't know who would be uploading the geomorphs, what order they would be laid out in, how I was was going to get the party to a place they would be using the battle maps (as we left off with the party partway through a crypt-like dungeon full of ghouls and the like.

Sure, areas which they hadn't seen or come across are easy to change, delete, rearrange, etc - but I had to keep the campaign in it's moment.  We weren't going to do some Dallas Dream sequence just to make a nice show for out viewers.  Still, I need to be ready for just about everything.  So after reworking the current level of the crypt, I added a second level to the crypt.

Now, as I was unsure it what order or even how the geomorphs were going to be used, I designed encounters to be assigned to each individual geomorph map tile.  Which surprisingly worked better then I expected, but also means I prepared for way more encounters that were actually used.  I'm kind disappointed we didn't get to use the one that quickly became my favorite as I was preparing them.  I'll save that one for later ;)

Now, next week will be a return to Matt's geomorphs, but as I now know that I get to place and rotate the map tiles I'll be better prepared to make sure everything works as a coherent whole.  Oh, and I have a whole week to to do it :)
Posted by Tenkar at 5:37 PM