Games From the Basement - Shadows on the Borderland (RuneQuest 3 Adventure) 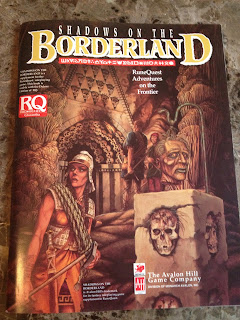 I really really liked RuneQuest back in the day.  I certainly liked it a lot more than my players did.  Maybe it's because I bought Dragon Pass before I even got my first RuneQuest game (not that anyone ever played Dragon Pass with me - ah well).

I found RQ3 (the Avalon Hill Deluxe Edition) before I found RQ2 (Chaosium).  So, I didn't dwell too much on the differences between the systems.  I used RQ2's Pavis and Big Rubble with RQ3, converting on the fly.  I really dug the setting more than the system in the end I think.

Shadows on the Borderland is one of the few RQ3 setting books (or boxes, most were boxes) that I really dug (one day I'll post about Monster Coliseum and how that manuscript should have been burned instead of printed) , but I bought it long after we moved back to AD&D and RIFTS and Space Master and such.  Which is a shame, because there is much goodness here. 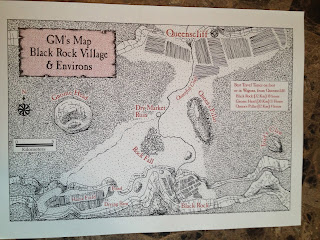 Maybe I should brings some Broos to my ACKS campaign and convert some of the scenarios within.  Between this and WFRP, they'll be confused to all shit ;)
Posted by Tenkar at 8:09 PM