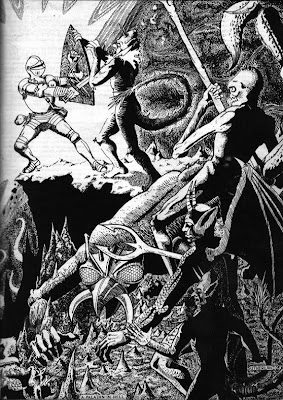 (Again with the manufacturing issues that don't exist.  Clerics and Paladins have coexisted since the 70s.  If it aint broke, don't fix it)
Original article is here
Okay, so you’re not likely to see a paladin and a (good) cleric throw down. The fight referred to in the title isn’t a literal one. But there is the potential for conflict in concept. Recently, we wrote about the cleric being both an armor-wearing, mace-wielding crusader and a flamestrike-casting priest, and a lot of you suggested that the former cleric archetype steps on the toes of the paladin. Or the paladin steps on the toes of the cleric. Either way, it’s a fine point. The paladin is also an armor-wearing crusader. So how do we ensure that these types of characters are different? (are we giving clerics swords and lay on hands?  must all clerics be lawful good?  do clerics get combat maneuvers or whatever the f' they are going to call it in De Next version of De Game? are paladins getting boat loads of spells?)
One way is to focus more on the knightly aspect of the paladin: the cavalier in shining armor with a sword and a valorous battle cry, astride a mighty destrier (that horse is going to be awkward in dungeons, unless it is a classic summonable paladin steed). Thus, to distinguish them from clerics, we’d give them bonuses to mounted combat (and this will be useful exactly how often?), and maybe focus on their interest in protecting their allies. Maybe a paladin shares a shield bonus with those next to him or her, for example (that may work, and is definitely stolen from MMORPGs.  isn't that what folks accused 4e of). A knight in shining armor indeed. Such abilities, of course, would make paladin players want to fight from horseback (hard to do inside) (didn't i just say this?  and why do the abilities only have o work on horseback?). But it would also encourage them to think defensively and look at friends protectively. Perhaps as the paladin gains levels, the ability to protect allies from harm would increase—his or her mere presence could give bonuses to saving throws because allies are so encouraged by having him or her nearby. (wait, isn't that what Protection From Evil 10' radius already does?)
Or, perhaps we accept the idea that a holy warrior who smites evil foes is interesting enough that we allow both paladin and cleric embrace that archetype, just in different ways. The cleric’s got spells that aid him in combat, of course (as he always has), and the paladin has a unique ability to truly destroy her evil foes. A damage bonus against all evil foes she faces would certainly lay a clear path toward what a paladin is “supposed” to do, at least in the minds of some paladin fans (this makes more sense than the awkward mess above).
These are all abilities paladins have had in various prior editions. We could also hop on the train to Crazytown (i have never this expression before.  where and what exactly is Crazytown?  There is a Crazytrain, but I guess WotC doesn't want to reference Ozzy) and give paladins really new and truly unique abilities. Perhaps the paladin’s holy nature protects him or her against evil to a degree that he or she resists damage from all evil foes (and eventually can extend that protection to allies). Or maybe a paladin gains huge skill and movement bonuses if he or she is moving toward a quest that involves fighting evil or protecting the weak (this is too metagamy for my tastes). Or maybe the paladin eventually gains the ability to teleport right to the nearest concentration of evil (now this idea is just plain stupid).
Like I said, Crazytown (or Stupid-Moronicville Village Idiot). But you see where I’m going, I think. The paladin offers some interesting opportunities for wild class abilities. Historically speaking, a paladin is likely second only to the monk for being the class with the most over-the-top inherent capabilities.
What follows in the original is a survey.  I hate WotC surveys.  If you want to answer the Village Idiot survey, take the Crazytrain to Crazytown, or just use the link that is at the top of this post.
Posted by Tenkar at 8:44 PM