Games From the Basement - Star Ace 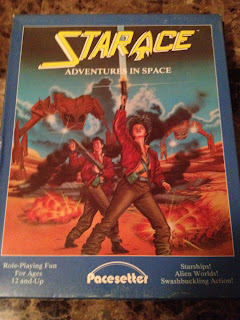 Pacesetter produced a fairly large quantity of games in a fairly short time, and Star Ace was one of it's RPGs (along with Chill and Timemaster - they all used the same core resolution system).

What can I tell you about Star Ace?  I clearly remember having one of my player's ships blown to pieces with him in it, and the players was left alive, floating in space. 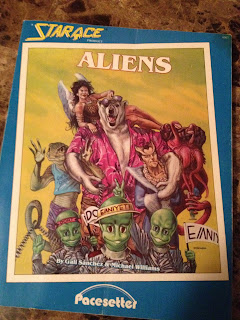 Ship destroyed, player floating around hoping for a space taxi to pick him up.  Or another player I guess.

Which meant to my eyes, the system had some major problems.  Then again, in retrospect, it's just as likely that I had totally misinterpreted the rules, and the player should have been dead.

Still, we had some good laughs about that one.  Don't think we ever played it again past that session (which is a shame, as I even picked up the Alien sourcebook dealie).
Posted by Tenkar at 8:12 PM

Email ThisBlogThis!Share to TwitterShare to FacebookShare to Pinterest
Labels: games from the basement, star ace