Games From the Basement - Star Trek: The Adventure Game 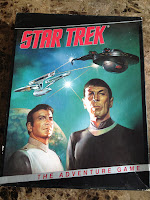 Yes, Star Trek: The Adventure Game.  This gem was put out by West End Games.  The best art was the cover, but it uses Star Trek: The Movie (or one of the movies) for the uniforms.  The back cover shows a shot from Star Trek: The Original Series (with Kirk wearing a green shirt, which wasn't that common.  or was it?) 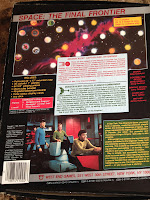 Anyhow, I picked this up for a few reasons back in the day.

First, this sucker was Star Trek.  Star Trek rocked, and was always more my kind of Sci-Fi than Star Wars ever was (not saying Star Wars was bad - it was pretty awesome, but Star Trek is the Sci-Fi I wanted to live). 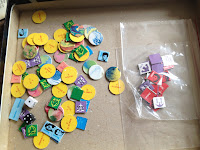 Second, although it says it's for 2 players, it also prominently stats on the back of the box that it's suitable for solo play.  As a role-player, I never had trouble getting a group together, but getting together for 1 on 1 play was rare to non existent.  What few war games I had I rarely had someone to play with.  A game that billed itself playable by one player sounded awesome. 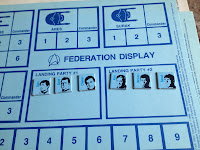 Alas, few things work out as well as planned, and this was one of them.  The rules were fairly intricate - this was not a sit down and play game, but a sit down, grab a drink and start studying these damn rules.  Fairly heavy rules for something that had a whole book of solo adventure type paragraphs.  Study I did.  Look at the box.  Look at the counters.  Everything was punched out.  I tried, I really tried.  But a s a solo game this sucked.  It was boring.  It was hard to get invested in it.  The counters were less exciting to look at than those of the war games I wasn't playing. 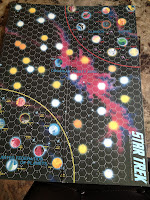 I still think of this game from time to time.  Wondering if it was me.  Was I somehow defective and not the game?  Would it have played better as a two player game (probably, but than again, probably not enough better to justify the experience)?

Ah well, this one is definitely destined to go to storage.  Interesting more as a curiosity to me and little more.  It's a shame, really.

But hey, here's Spock for your Hobbit enjoyment ;)

Email ThisBlogThis!Share to TwitterShare to FacebookShare to Pinterest
Labels: games from the basement, star trek