Sandbox Thoughts - Why is There a Giant Living Outside of Town? 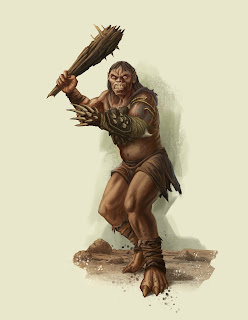 Civilized areas will deal with large threats and generally ignore small ones.  Small bands goblins might threaten travelers on the roads, but that is why one hires guards.  They would be fools to threaten a town or village, as the repercussions would probably be lethal and final.

The further from civilization, the greater the chance that some serious baddies will roam relatively unmolested.  The less serious baddies?  They will be found as tribes in much greater numbers than in the outskirts of civilization, or in the employment (or enslavement) of stronger elements.

What does this mean for my sandbox?  For the most part, wandering encounters in the initial, fairly civilized starting area will be level appropriate with some exceptions.  Those exceptions will generally leave signs or hints of their existence, be seen initially from a distance and / or be unique to some extent. Their point of existence is not to decimate the party, but to remind them that there are forces they are not yet strong enough to engage, let alone defeat.  If they do engage, they deserve whatever results befall them.

Now, every rule needs an exception.

Want to drop an ogre into the environment?  Maybe he does odd jobs around town, and in turn they keep him well fed.  Maybe the feed is leftovers from the tavern, or maybe it's travelers that stay at the inn.

In a sandbox, things generally should exist for a reason.  Is there a goblin raiding party in the area?  Maybe they were cast off from a larger tribe further away.  Maybe their tribe is starving, and they are looking for new lands to feed their families.  The more you give the players to work with, the more they will start giving you, the GM, stuff to work with.  It's a two way process. and rewarding when it works well.

Next up, I'll talk about setting up wandering encounter tables for your sandbox.

Hill Giant by David Rabbitte
Posted by Tenkar at 12:43 PM

Email ThisBlogThis!Share to TwitterShare to FacebookShare to Pinterest
Labels: sandbox