Want a Chance to Receive a PDF Copy of The Forbidden Caverns of Archaia Megadungeon? 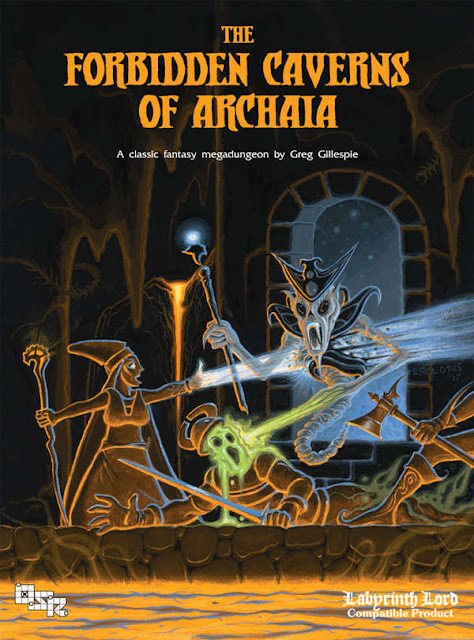 Thanks to the generosity of +Greg Gillespie , he of Barrowmaze fame, The Tavern is offering you a an opportunity to receive a PDF copy of The Forbidden Caverns of Archaia, Greg's latest release. Its a megadungon composed of a sandbox setting and multiple dungeons and it is without a doubt, a campaign worth of gaming and then some.

So, how do you get entered for a chance to be gifted with such an amazing OSR release?

Its really simple - name and describe a bartender that may be found in a fantasy tavern. Use two to three sentences for your description. On Monday morning, 9/18 at 11 AM I will chose one random commenter to receive the The Forbidden Caverns of Archaia Megadungeon PDF. A second commenter will receive a $10 RPGNow Gift Certificate for "Best Bartender." Best Bartender is totally subjective to my whims ;)

The lost city of Archaia - an ancient ruin sunken into the earth - lies deep in the badlands. In recent years, caravans from Eastdale have come under attack from orcs, goblins, and worse. Some say these blood-thirsty warbands have made lairs in the deep caves and ruins. Sill others say the ancient halls are filled with magnificent treasures left by the Archaians. Are you brave (or foolish) enough to delve The Forbidden Caverns of Archaia?

FCoA is brought to you by the Old School Renaissance (so don’t forget your 10’ pole).

Remember, purchases made via The Tavern's affiliate links enable us to offer gifts back to the community - and keep your bartender in fresh, cold beer ;)
Posted by Tenkar at 10:40 PM

Email ThisBlogThis!Share to TwitterShare to FacebookShare to Pinterest
Labels: barrowmaze, the forbidden caverns of archaia