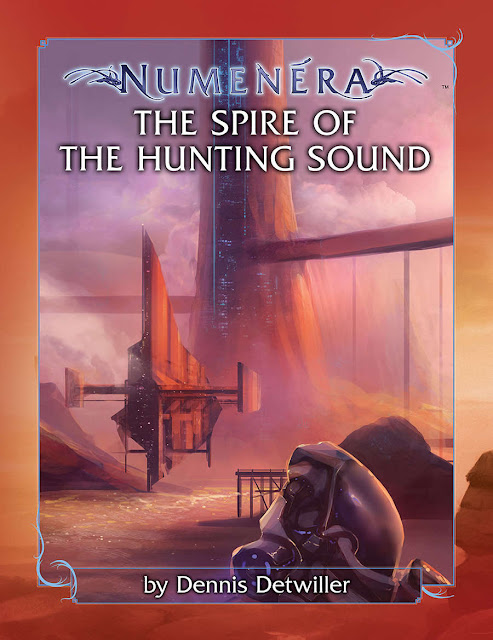 I've never played Numenera. I backed the Kickstarter way back when and I've heard good things about the setting and the system but I've never had the time to give it a proper read. Maybe with the The Spire of the Hunting Sound Quickstart Adventure for Numenera I might find a reason to pull the core book off the shelf. Heck, for the price of free I may be tempted to run this.


A roiling green desert haunted by invisible beasts. A game that consumes those that play. Faceless automatons from another world, and a tower of living sound. The characters have survived the hijacking of the airship Aelestrian, but can they survive the unknown reaches of the Ninth World in which they find themselves?

The Spire of the Hunting Sound is a complete adventure—plus complete quickstart rules—for novice and veteran Numenera players. If you’ve never played Numenera, or don’t even own the game rules, you’ll find everything you need (except dice!) to learn, run, and play the adventure. And experienced players will love the adventure itself. It even comes with a set of five characters, fully pregenerated and formatted to make it easy to learn Numenera.

The Spire of the Hunting Sound includes:

A complete Numenera adventure, filled with the splendor and wonder of the Ninth World.

Quick-start rules to get you going, even if you’ve never played Numenera or the Cypher System.

A set of five pre-generated characters in a beautiful and handy format that’s great for novice players as well as Numenera veterans.

A mini-bestiary with all the details on the creatures encountered in this adventure.

The Spire of the Hunting Sound was the 2017 Free RPG Day adventure for Numenera.