RPGNow is running a September Setting Sale with thousands of titles in the mix. That's a lot to sort through. I'm going to try to pick out some of my personal favorites that are OSR or system neutral over a small series of posts (although one or two may creep in from outside those parameters ;) 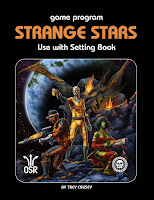 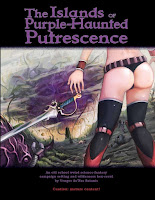 The Islands of Purple-Haunted Putrescence - "This is a weird, science fantasy, gonzo campaign setting and wilderness hex-crawl for old school fantasy roleplaying games.  The Islands of Purple-Haunted Putrescence is a guide for helping you run crazy sandbox scenarios in a lost world of Snake-Men, dinosaurs, and mutant sorcerers... an exotic and deadly region possessed by a demonic, purple-hued god of ruin and consumption. If you're into the OSR or just want some strange 5e flavoring, give this a try. It's not your usual adventuring environment, but it will be memorable!"
10.00  6.70 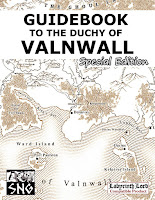 Points of Light - "War horns wail and perilous realms cry out for heroes! Four settings, each detailed and mapped, ideal for novices launching their first campaign, or veteran GMs looking to challenge 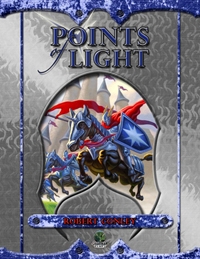 their players with terrible foes and foreign lands...  Wildland:The fall of the Bright Empire left warring factions in its wake. As savage barbarians and wicked humanoids roam the land, the last bastions of civilization cower behind their crumbling city walls. A dark age has come, and none may live to tell the tale. Southland: On the frontiers of the Great Kingdom, the nations of men, elves and dwarves join together against the wicked elves of Nighportal Keep and the Orcs of the Bloody Fist. A realm is yours for the taking, if you can carve it from the wilderness.  Borderland: Two factions clash over war-torn fields, battling for dominance in a civil war that that has torn a once-mighty empire in two. When brother strives against brother, and blood runs in the streets, who will emerge to unify the broken land—and at what cost, peace?  The Swamps of Acheron: In the Outer Planes, amid fetid swamplands and ice-choked mountains, the fell god Sarrath holds court. In a realm where gods stalk the earth, will you dare to take a stand, or will you succumb to evil." 7.99  5.35 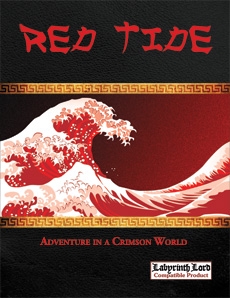 Red Tide: Campaign Sourcebook and Sandbox Toolkit - In this book a Labyrinth Lord will find all that is required to run a sandbox game of adventure in the Sunset Isles. In addition to the races, classes, and sorcery of this savage land, a referee will find special tools and resources for creating shadowed courts of quarreling nobility, cities rife with struggle, wild border settlements that cry out for the help of heroes, and dark places in the earth known only to the dead and the damned. These tools will aid not only campaigns in the Sunset Isles, but also those games set in other lands of savage mystery and bloodstained blades. Expanding on the tag system found in the free Stars Without Number sci-fi role-playing game, Red Tide includes more than fifty new tags for fantasy cities and borderland settlements, along with more than 25 pages of GM resources including culture-specific name and place lists, unkeyed blank maps for quick sandbox use, four pages of room dressing and treasure possibilities, and a new "diagram dungeon" method of quick dungeon generation with a worked example.  7.99  5.35

Remember, all purchases made via The Tavern's affiliate links helps to support The Tavern. I appreciate every purchase our readers make. Thank you.
Posted by Tenkar at 10:33 AM