Heh! I'm becoming a "press release" site it seems - not! But it does just so happen that there is a lot of cool stuff being announced jut before Gen Con and folks are nice enough to send me the announcements. I may need to steal back my NYPD Police Officer action figure from Pinkie with this one ;) 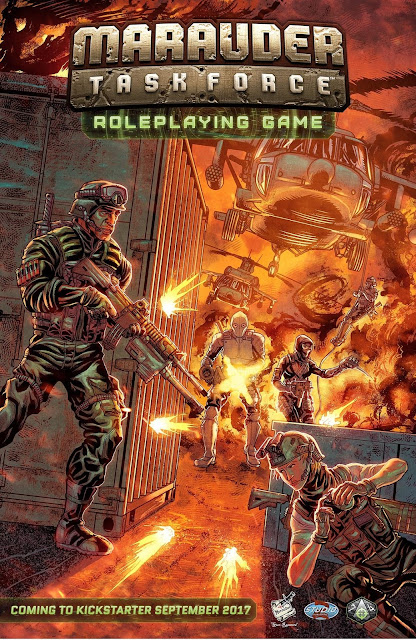 Marauder Gun-Runners is pleased to announce a new way to enjoy our figures:

Using any action figures you have, or better yet, by building your own characters with Marauder Gun-Runners extensive line of customizable action figures, you can play both a rules-lite head-to-head skirmish game and a full cooperative roleplaying game. As you build your own figure using Marauder Gun-Runners' wide assortment of modular accessories, your build choices determine your character's options for attack and defense. In between missions, you can reconfigure your character's build based on the type of operation with many different accessory options available on the Marauder Gun-Runners site.

The Marauder Task Force RPG Rulebook will include all the rules you need to play both modes of the game. With an optional add-on of weapons and armor cards, you can easily keep track of what dice to roll for both the RPG style play and, on the reverse side, the lighter skirmish rules. What's more is the creators of the game will release stats for all future Marauder Gun-Runners releases.
The game is run using the new Tactical RPG game system that is flexible, fast, and fun to play. In RPG mode, the game is built around a CO who leads play in a typical RPG fashion and each of the players builds their character based on class templates. They can use their existing figure or custom build their character on the Marauder Gun-Runner site. The players' characters are a squad of highly trained operatives—the Marauder Task Force!

The Marauder Gun-Runners team will be producing the game, reflecting the same high quality and attention to detail you've come to expect from our figures and accessories. Each item sold from our site will have the required stats to use in the game.

The game's design team will be led by David Wilson Brown (publisher of CypherCaster Magazine, former publisher of Adventures in the East Mark) and will include contributions from Justin Bell (Kindle Worlds G.I. Joe stories & other works, Eagle Force Returns). Lead editor on the rulebook will be Jeremy Land (The Eschatology Code, Baby Bestiary)

Look for the game to be launched this September on Kickstarter and check out the Marauder Task Force figure exclusives tied to the game. After funding by the Kickstarter is complete, the book will be available direct from Marauder Gun-Runners as well as in distribution for wholesale through Studio2 Publishing with a target release of Spring 2018.

Please send any inquiries to RPG@marauderinc.com

Having dealt directly with Davis Wilson Brown I can say this project is certainly in the right hands. Damn but it looks good. I may need to cut down on trips to the pub for lunch to save up for this ;)
Posted by Tenkar at 6:40 PM