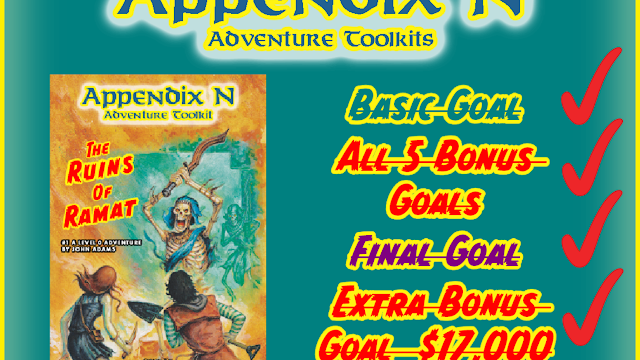 Its July, 2017 and that means that Appendix N Adventure Toolkits is now at the FIVE years past due mark and still not fully fulfilled. 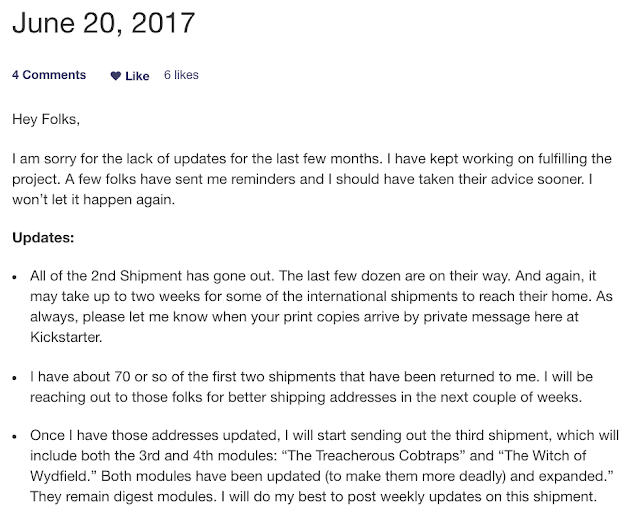 That's just part of the last update. Anyhow, YEARS ago I got my copies of the first two adventures. Someone told John it would be wise to get me mine, to keep me "on the good side." I guess it did, and John sure has gone through some genuine tragedies over the past five years (con crud not being one of them.) Still, lets take a look at where we are at:

- Five years later and folks are still waiting on the first two adventures. There are four more promised via stretch goals and a digest sized game box. All in print. All shipping NOT together. Anyone else see the problem here?

- Folks that got the first 2 adventures after the initial shipments got bonus material. Why? I have no idea but there are still folks that haven't gotten the items promised in the initial Kickstarter offering.

- Did I mention in the midst of all this there were complaints that the initial releases were showing up in stores with backers (years later) still out of luck?

- I was idealistically stupid. I backed for $101 at 5 of each offering (the more to give away) and that included shipping. Any idea how much shipping has increased over the last FIVE years?

- Read this about International Shipping

Yes, a fool and his Kickstarter are doomed for failure.

- I don't think that this can ever be completed in print. The money is long gone and even if it weren't, there isn't enough raised to print and ship HALF of what is promised. I think John should release the PDFs of ALL that was promised to backers in PDF and call it a day. Fall on the sword and close your career in gaming on a quasi positive note.

All that and he's still given us more than Gareth and #ConManKen combined.