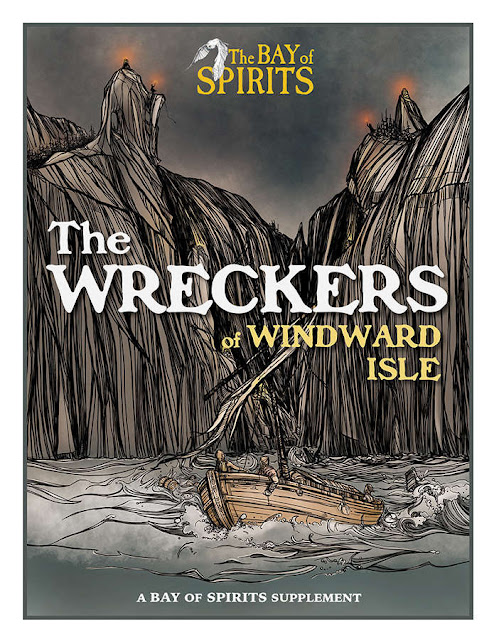 Sitting at the entrance to the Bay of Spirits is an imposing rocky island that has been a hazard to ships and seafarers since the early years of exploration in the region. The weather, rough seas, pirates and the damnable Wreckers make ocean voyage in the area perilous at best. The land itself can be just as dangerous with adventure and intrigue around every corner.

Yeah, doesn't really tell squat. Good news is that I ponied up my $1.79 (as it is 40% off of the usual $2.99) so I can tell you what it is. It is an OSR setting with adventure hooks and such. Maybe it is more accurately a micro-setting as it covers all of about 1.75 square miles.

I'm actually less interested in that than the locations and personalities within the setting, as they are generally the easiest to port to your own campaign, and stuff looks highly portable. Well laid out with pleasing art, this is well worth your 3 bucks, let alone a buck seventy nine. If I have a complaint, and its a fairly common one, the NPCs have too much magic. But that's my perspective and it may not be yours.

OSR non denominational, it should fit the ruleset of your choice with relative ease.

Normally $2.99, The Wreckers of Windward Isle is on sale until tomorrow morning for $1.79.

Remember, The Tavern gets paid a small amount from every purchase that uses affiliate links like the ones above. Please remember to tip your barman.

Email ThisBlogThis!Share to TwitterShare to FacebookShare to Pinterest
Labels: adventure, deal of the day, OSR, settings