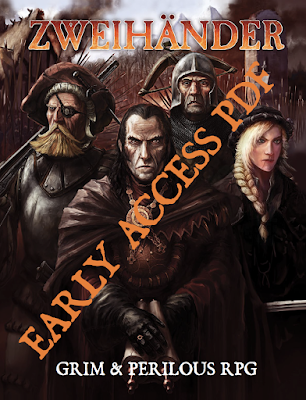 Some background on my end. I ran Games Workshop's Warhammer Fantasy Roleplay (hereafter referred to as WFRP 1e) pretty much from release until the campaign ended when the party's aspiring mage fumbled a fireball as he wore a bandolier of flasks of oil. It was certainly a way to end a campaign on a fiery note.

When WFRP 2e was releases by Green Ronin, I grabbed much of that line. When FFG releases WFRP 3e, I picked up the boxed rules and realized the latest edition of WFRP was not for me. Cubicle 7 is releasing a 4th edition, which will harken back to 1st and 2nd edition.

So, where does that put Zweihander? Its pretty much a house ruled WFRP 1e with many of the serial numbers scratched off. It has the right feel even if much of the WFRP tropes aren't accessible due to trademarks and the like.

Oh, and its big. 631 pages big. The PWYW version is sans art and called "early access" but really, its the full game. The full art, finalized version is available for 20 bucks in PDF.

Do you have fond memories of WFRP? Never played it and want a glimpse of what it was before the horrors of 3rd edition? Here's you chance at no risk.


ZWEIHÄNDER Grim & Perilous RPG is a bloodier, grimmer and grittier version of classic tabletop role-playing games you may already familiar with. The community calls this style of gaming the “pathetic aesthetic”, but we simply call it grim & perilous gaming.

A percentage of sales made through The Tavern's RPGNow affiliate links are returned to The Tavern. We appreciate your support. We'll keep the doors open late...
Posted by Tenkar at 10:50 AM