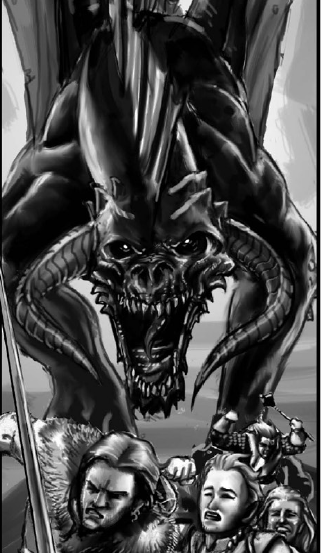 So, my players launched a frontal assault on a dragon tonight in the caves above The Lost City of Baracus. I expected either a successful attack by the players with minimal casualties (not likely in the least) or a TPK. We nearly had the TPK but not quite.

After last week's dark elf slaughter the characters knew there was a dragon nearby. While discussing plans amongst themselves, they heard the squeaking of rats and then a whoosh and a splash and no more squeaking, leading them to believe the dragon breathed acid - they were right.

Figuring now was the time to attack, the party's cleric took the lead and charged with the magical (continual light) torch. He surprised a goblin that was gathering the dead giant rats and skewering them on a stick. Then there was the matter of the black dragon head sticking out of the corridor to the north.

The party has initiative. The thief and the bard fire their dark elf hand crossbows (with sleep poison bolts) - a hit and a miss and a successful save. Cleric and fighter swing. More hits, both from the part and the dragon. Dragon's bite for a lot of damage as the cleric found out.

Next round and the dragon has initiative. Acid breath takes out the cleric and damages the other three. It would have been worse but I applied the damage inflicted to the dragon against his acid breath - he only inflicted current HP in damage, not his full HP amount. I am a kind and benevolent DM ;)

Another hit is scored on the dragon, this time from a poisoned bolt that did not hit the fighter in the way. The save is failed and we applied a -4 to the dragon's attacks, with a second failed save indicating sleep.

A new round and the Fighter falls to a claw and a bite. The bard charges in with his sword that is + 2 vs reptiles. He misses, as does the thief's bolt that goes far and wide.

Two down and two to go.

The remaining party members and the dragon tie their initiative roll. The sword strikes true as does the dragon's bite. The thief's bolt is far and wide again. The bard is chomped in two and the dragon retreats into the cave behind, licking his wounds, having lost approximately 85% of its HP. As the thief fires bolts blindly into the darkness the dragon flees the caves completely.

Not either of the possibilities I had expected but still awesome. Even omitting the successful charge through the gore, entrails and acid to retrieve the reptile slaying sword.

New PCs are ready to go for next session :)

Email ThisBlogThis!Share to TwitterShare to FacebookShare to Pinterest
Labels: session recap, Swords and Wizardry Light, the lost city of baracus