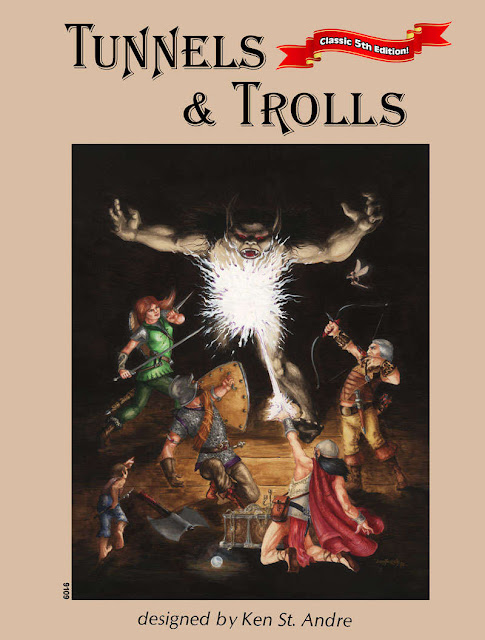 When it comes to Tunnels & Trolls, 5e is probably THE edition (much in the way AD&D 1e is pretty much THE D&D edition for many) It hasn't ben officially available in PDF format until now. Why is that important?

When I play T&T, either in a group or solo, its always 5x. Its the sweet spot, where the T&T system came into its own and the generation of the popular T&T solos.


Tunnels &Trolls is the 2nd oldest role-playing game and has been in print since 1976.  This 100 page PDF contains the classic and widely popular 5th edition of T&T. This is the version that most people remember and used from 1979 to 2006. Like most rpgs you play this with a GM and a group of players.  Play is quick and streamlined and T&T has more emphasis on role-playing and less on charts and reference books. All the rules you need are in this book and there is even a small GM adventure in this book you can use. The other unique aspect of T&T is that it’s one of the few rpgs you can play solitaire. There are well over 50 solo adventures available, including 26 published by Flying Buffalo. (Many of them are on Drive-thru.) Download a copy of the classic version of T&T and find out why it has endured for so long.

Remember, 5% of all sales via The Tavern's OBS Affiliate links go to support The Tavern
Posted by Tenkar at 4:23 PM