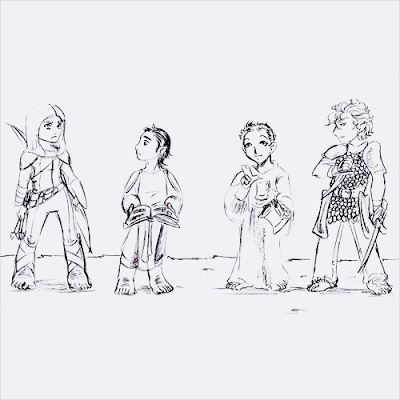 A while back (October of 2012 to be exact) I wrote Demi-Options: Halflings for Occult Moon. It was supposed to be the first in a series of releases, but for reasons that are no longer of import it was one and done.

So, what exactly was Demi-Options? Well, here's the boilerplate:


Ever want to do an all Halfling party, but 6 Halfling thieves just wasn't going to be to your, or your players', satisfaction?
Are you tired of ALWAYS having to play a fighter when you want to be the Dwarf?
Ever want something more than playing a human based class in Elvish body?
If you answered yes to any of the above questions, Demi-Options was written with you in mind.
With Demi-Options, as the GM you are presented with multiple class options broken down by race.
Broadly, they cover the four basic human classes, but tweaked and reworked from the demi-human point of view. They are presented as options. As the GM, you can use all, some or none as options for your
PCs. Some may fit well with your campaign ideas, while others may not mesh as cleanly. You may decide to restrict them to NPCs only, but it's my hope you'll open at least some of them for your players to use.
As a player, Demi-Options is your chance to stray away from the Dwarven Fighter or Halfling Thief archetypes. Become a Dwarven Spelunker, setting traps for the goblins and attacking them by surprise.
Inspire your party to greatness as a Halfling Lorister. Break the old mold and embark on a new path.


That's what I want to revisit. I want to rewrite D-O Halflings with better art and presentation, make it friendly for SWCL through Complete and add more classes. Now, that's simple, right? Then do the same for Dwarves and Elves.

Here's one of the classes I wrote back then:

(note - the other Halfling classes are Brewmaster, Lorister and Adventurer)

Every community needs it’s protectors. Halflings have their Warders. Trained to fight foes both head on and from (preferably) a distance, they are guerilla warriors of the wee folks. Many a foe has met their untimely demise at a distance when Warders have targeted them.

Strength Bonuses: Unlike most other character classes, Warders with a high Strength can have bonuses to hit and on damage.

Thief Skills - Hide in Shadows and Move Silently as a Thief of the same level. Note: these skills only work outdoors for Warders.

Goblin Lore - the Warder has learned of the weak spots of Goblins, a humanoid race they often compete with for lands and food. Warders gain +1 damage when engaged in melee or using missile weapons against goblins.

Nature Lore (As Druid First Mysteries) Gained at 3rd level - at 3rd level, the Warder can determine whether water is pure; identify any normal plant by sight, smell or taste; and move easily through non-magical undergrowths, including thorns or heavy vines.

Thanks to +matt jackson for making me think of this ;)