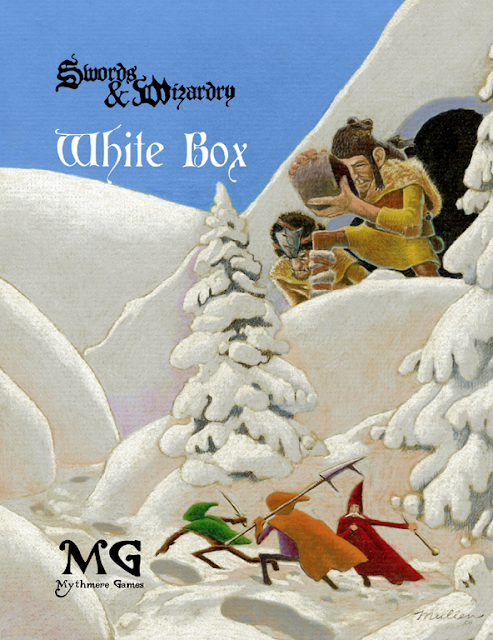 In part this is in response to a recent discussion about minimalism in the OSR, but in reality it is something more. Its an observation of S&W White Box importance to the OSR and also a design goal of S&W Light. Well, observation and design are linked but not the same but are addressed together, but I digress.

I want to look at Swords &Wizardry White Box. Anyone care to guess how many games are based on that open ruleset?

Off the top of my head:

I'm sure there are more that I've either overlooked or forgotten and I apologize in advance.

So, why do so many games build off of the S&W White Box engine? The answer is simple. Literally... It was / is one of the most basic OSR rulesets, meaning it was, and is, an easy choice to build on.

It is easier to build on top of another ruleset than to remove rules and modify and rebuild. Trust me. I have some knowledge of this, as I stripped the Swords & Wizardry White Box rules down to the four pages of Swords & Wizardry Light. The very reason I chose the White Box rules was that simplicity. Sure, there was stuff I had to strip and drop, but not nearly the amount if I had chosen S&W Complete.

I was initially surprised when other designers / publishers reached out to me as I was writing and rewriting the SWL rules, asking to see the work I had done as a guide to use for their own projects. I'm no longer surprised. Much as S&W White Box is the chassis for a number of variant rules, I suspect when the Swords & Wizardry Continual Light rules are released (16 pages or so), there will be variants and genres and rules specific settings that will use SWCL as their chassis.

Because adding is easier than subtraction.

Swords & Wizardry Light / Continual Light are written for the community. To be played, houseruled, hacked and mashed into what you want it to be. Add what you want. Its hard to break. The core is solid.

Heck, I have hacks in my head. Genres. Settings. Hacks. I find 16 pages of rules to be liberating, not restricting. Empowering, not powerless.

I look forward to the hacks of the future.