Yep, there's less than four days left to the RPGNow GM's Day Sale. And yes, there's more OSR picks to be had :) 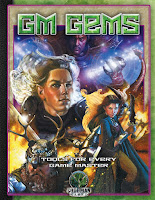 This post is Part VI. Part I ,  Part II , Part III, Part IV and Part V are linked. Remember, 5% of your purchase goes to support The Tavern and associated costs for projects like Swords & Wizardry Light and the upcoming Torchlight Zine.

GM Gems - A system neutral (with a free expanded DCC RPG version included in the purchase) book of tricks, advice and tools for every GM. Its from Goodman Games, so you know its good - did I mention its 50% off? - "GM Gems: A Tome of Game Master Inspiration is filled with a wealth of information and ideas to empower every aspect of your game. Never run boring, vanilla games and never be caught flat-footed! Inspiration and Perspiration - This 80-page collection of tricks and tips is systems-neutral, so you can play it with any role playing game you choose. GM Gems is written by veteran Game Masters and some of today’s best known RPG designers, and includes: Alchemical Mishaps - Empty Rooms Worth Describing - Extraordinary Campsites - Familiar Creatures with Unfamiliar Faces - Short Encounters for Short Attention Spans - Unique Taverns and Inns - Unusual Holidays - 100 Unique Treasures - And much, much more!" $11.99  $5.99 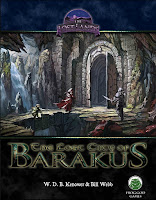 The Lost City of Barakus--Swords and Wizardry - Frog God Games has practically their entire catalogue on sale at RPGNow for the GM's Sale, which made picking a title to highlight difficult. But then it wasn't. Lost City of Barakus is the campaign I've been itching to run for ages, and the fact that it covers levels from 1 to 5 (or 6) makes it perfect for Swords & Wizardry Continual Light - "The Lost City of Barakus, designed to take characters from 1st to 5th or 6th level (or higher), is as much of a campaign setting as an adventure. Detailed within these pages is the great, bustling metropolis of Endhome, the Penprie Forest and Duskmoon Hills located north of that city, and, finally, the huge dungeon that is the Lost City of Barakus. Within all these areas are many adventures, NPCs, and locations for the party to explore, interact with and conquer. How and in what order the party chooses to take on the various challenges before them is entirely yours (the GM’s) and the players’ choice." $19.99  $13.99 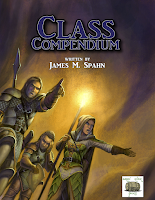 Class Compendium - Over 50 new classes for your Labyrinth Lord campaign? Heck, they are easy enough to convert to just about any OSR ruleset of your choice. By +James Spahn none the less ;) - "The Class Compendium for offers over fifty alternate character classes for labyrinth lord and other old-school fantasy role-playing games. With these new options you'll be ready to face whatever dangers that lay hidden in the deepest dungeon of your next campaign! Class Compendium compiles the best classes from four years of material previously released by barrel rider games into a single tome – and a whole lot of extras! New art, rules for firearms and weapon mastery, new equipment, and three never before released classes! Top it off with an indexed spell compendium featuring every spell used by every class found in these pages, and you've got it all in one package!"  $9.99  $6.99 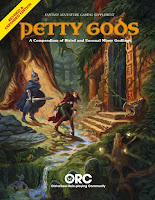 Petty Gods: Revised & Expanded Edition - always free, but I figured it should be mentioned. Grab it! Grab it now! You'll never find a more professional and complete and useful assortment of Petty Gods. For Ratacus! - Expanded Petty Gods Compendium provides Old School referees with a slew of new, weird minor deities and godlings, for use in rounding out their campaigns. This book includes information for 327 petty gods, 116 minions, knights & servitors, 12 cults, dozens of divine items & new spells, plus a host of other petty-god-related gaming material!  Free!  Free! 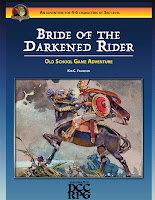 Bride of the Darkened Rider - Fat Goblin Games' first DCC RPG release, literally released earlier this week - "Two of the kingdom’s baronies have been at odds and occasionally outright war for centuries, in a blood feud that lost all meaning generations ago. Things have recently changed as the heads of the two noble families have arranged a marriage between the heirs to their baronies, in a move to secure peace and prosperity to the region. - This particular adventure has two sections. The first is an event based part of the game, where the players proceed from one event or scene to the next in a straightforward manner. Each scene or event is self-contained, but has links to the previous and the upcoming events. The latter half of the adventure, when the characters are finally ready to confront the villains of the adventure is a more classic dungeoncrawl, with pits, traps, monsters and treasure. Make sure you familiarize yourself with both before you start the adventure for your group. The adventure itself is written for 4-6 3rd level characters, but is adjustable for other levels of play as you see fit." $5.95  $3.95

Apes Victorious - Apes are the ones in power in the future. Humans are slaves - This is the Planet of the Victorious Apes! ;) - "Apes Victorious is a roleplaying game in which you take the role of an astronaut from the 1970’s who finds himself marooned on a future Earth ruled by intelligent apes. Players may also take the role of an ape, a degenerated human, or a psi-active underdweller. Fight to survive in this post-apocalyptic future ruled by four species of apes. Or play apes who hunt humans for sport. For a different kind of campaign, play highly intelligent but insane underdwellers who have advanced technology and powerful psi powers. This book contains: A complete game - A post-nuclear apocalyptic setting in which apes have become the dominant species - Seven player classes - Animals and creatures of the post-nuclear future - Campaign advice - A complete introductory adventure - Conversion notes for compatible games including: Labyrinth Lord, Mutant Future, Starships & Spacemen.  $4.97  $3.48
Posted by Tenkar at 7:01 PM