Yep, its time to make some OSR Picks for the current GM's Sale at RPGNow. This post is Part III. Part I and Part II are linked. Remember, 5% of your purchase goes to support The Tavern and associated costs for projects like Swords & Wizardry Light and the upcoming Torchlight Zine. 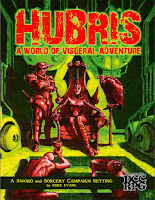 Hubris: A World of Visceral Adventure - I've reviewed part of this book and it is simply amazing. Solid 5 star reviews on RPGNow - "Hubris is a weird fantasy setting that  uses the awesome Dungeon Crawl Classics rules!  In this book you will find 10 territories filled with tables and charts to generate interesting locations and encounters, new occupations, 4 new classes, 5 new playable races, 3 new spells, 4 new patrons, including 3 patrons spells for each, 11 new and terrible gods, 14 tables and charts for a GM to use to aid them in their game or create interesting/fun situations, two new adventures to kick off a campaign, and 51 new enemies.  Hubris is hackable!  Each territory can be used as the GM wills!  Need a desert, swamp, or frozen tundra for your game?  Use what's in Hubris!"  $14.99  $10.49 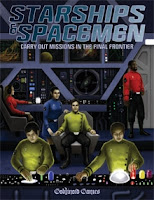 Starships & Spacemen 2e - What to play an OSR styled Star Trek TOS with the serial numbers scratched off? If so, this is for you - "Boldly explore the galaxy in search of alien civilizations! You take the role of a Military Officer, Technical Officer, Science Officer, or Enlisted Man in the Galactic Confederation. Travel in a starship under your command, on missions of first contact, rescue, exploration, and more in a galaxy full of hostile aliens. Try to maintain the tenuous truce with the militaristic Zangid, and fight the Videni who may look like your Tauran allies, but do not adhere to a philosophy of peace and logic. Design alien humanoids with either "original series" or "next generation" sensibilites, or blend the two approaches! There are 100 forehead shapes that may be randomly rolled when a new alien race is encountered." $6.45  $4.52 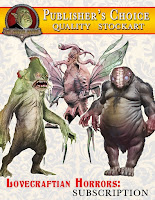 Fat Goblin Games - Stock Art - Whether its individual pieces, collections or subscriptions, Fat Goblin Games has an excellent assortment of high quality stock art, much of which is on sale. Perfect for little guys like me or bigger fish in our hobby ;)  30% off

Fat Goblin Games - GM Journal Series - If you are a mess like me, these form fillable PDFs are a Godsend. I just need to use them more. 30% off 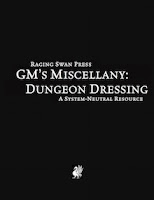 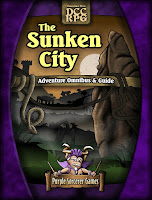 Sunken City Omnibus (DCC RPG) - What can I say? I've enjoyed all of the Purple Sorcerer releases - "The Sunken City Adventure Omnibus & Guide contains four complete beginning adventures and a host of new material to enhance your Dungeon Crawl Classics campaign. Features include - Every best-selling Sunken City Adventure (Perils of the Sunken City, The Ooze Pits of Jonas Gralk, A Gathering of the Marked, Lair of the Mist Men) combined and refined into a single full-color volume. Both a 96-page desktop/print version and a 200-page mobile version built from scratch for viewing on your tablet! A massive 84-page master appendix containing extra content, pre-gen characters, player maps, 1-inch scale battle maps, and over 150 paper miniatures.  A patron write-up of Malloc, the devious master of secrets. At long last... Opossuman player characters! Adventure seeds, new monsters, 24 new magic items, judging tips, and more!"  $12.99  $9.09 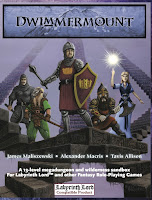 Dwimmermount (Labyrinth Lord version) - Yes, I know I have a history with Dwimmermount, but the final product far exceeds what was playtested by my group. So, kill some rats and grab your coppers, you have a dungeon to conquer! -  "The gates of Dwimmermount have opened. After years of rumors, it is time to discover the secrets of this vast mountain fortress for yourself... Dwimmermount™ is a classic megadungeon and old-school campaign setting presented use with Labyrinth Lord™ and other d20-based fantasy role-playing games." $10.00  $7.00 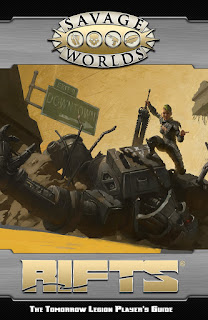 Savage Rifts - Sure, while not strictly an OSR pick, it does do something that the original Rifts rules could never do - actually make the game playable without ignoring or making up rules. Go figure - "In the battle for survival the Tomorrow Legion brings together the greatest, the bravest, and the craziest to stand against an infinity of threats. They stand for a better future than the past they've known. The Rifts® Tomorrow Legion Player's Guide contains everything you need to make and equip mega-powered characters for the Rifts® Earth setting. Iconic Frameworks load you up with options for well-known concepts (Glitter Boys, Juicers, Ley Line Walkers, Mind Melters), as well as the capacity to craft your own custom ideas. New Setting Rules bring home the gonzo, cranked-to-eleven nature of Rifts®, and the gear lists include everything from incredibly powerful weapons and armor to cybernetics to arcana-fueled Techno-Wizard items. New rules for Mega Powers bring magic and psionics to super-powered levels, and Hero's Journey tables flesh out your characters in exciting and fun ways."  Savage Rifts: The Tomorrow Legion Player's Guide: $14.99  $10.49
Posted by Tenkar at 11:24 PM