Yep, its time to make some OSR Picks for the current GM's Sale at RPGNow. This post is Part IV. Part I ,  Part II and Part III are linked. Remember, 5% of your purchase goes to support The Tavern and associated costs for projects like Swords & Wizardry Light and the upcoming Torchlight Zine. 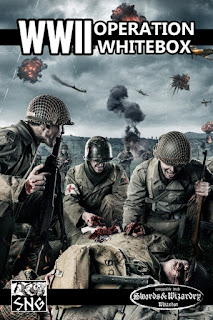 WWII: Operation WhiteBox - You want a WW2 RPG as well as one that stays true to the roots of RPG gaming? Look no further - this is built of S&W WhiteBox with a Sherman Tank as its shell - "Tabletop roleplaying games have always been about epic quests, heroic deeds, and great crusades. These games feature mercurial wizards, diabolical dragons, and cunning adventurers. Such fantastical tropes are not so different from what has come to pass in our own history. In fact, it is that commonality which gives such stories their power. But what gives World War II its true power is that it was all real. It happened. Real men and women fought and died—including many of our own living ancestors. They laid down their lives when faced with unfathomable evil. And that is legendary. WWII: Operation WhiteBox is an homage to these heroes, both living and fallen." $7.99  $5.59 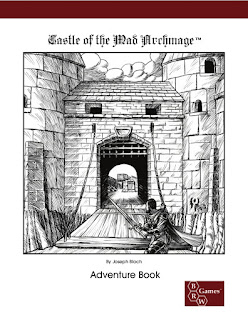 Castle of the Mad Archmage Adventure Book - Ever wonder what gonzo Castle Greyhawk may have looked like? (and I'm not talking about the TSR version with Gummy Bears). We'', here's one take on it - "More than thirteen levels and over 1,500 keyed encounters of perils, monsters, traps, and treasure to bedevil your players. Find levels of warring humanoids, the deadly Arena, ancient artifacts, lost temples, portals to other worlds, and the ultimate secret of the dungeons... the Mad Archmage himself. Originally released as a free electronic book in serial format, the Castle of the Mad Archmage has been completely revised, expanded, and updated. It is a complete adventuring environment, from the surface ruins to the deepest caves and caverns. You and your players could literally spend years exploring the dungeons beneath the Castle and still not discover everything. It can accommodate characters from first to fifteenth experience level and beyond."$9.95  $6.97 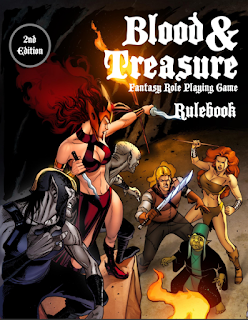 Blood & Treasure 2nd Edition Rulebook - Blood & Treasure is the OSR RPG offering by the man behind NOD and the series of Hex Crawls offered by Frog God Games. John knows his stuff -"Blood & Treasure is the fantasy role-playing game for people who want to spend less time arguing over rules and more time playing, and the new 2nd Edition continues this tradition. Compatible with old school games, it strives to be rules lite and options heavy. Thirteen character classes, as well as suggested variations on the existing classes - The classic fantasy races - A streamlined and easy optional feats system - Hundreds of spells and magic items - you can run games for years without running out of new things to try - Optional scientific treasures for those who like science-fantasy - Quick and easy rules for exploration, combat, mass combat, naval combat, strongholds and domains and a simple task resolution system - Guidance on designing dungeons, wilderness, settlements and even the cosmos - Suggestions on converting to other old school systems and changes between the first and second edition." $9.99  $6.99 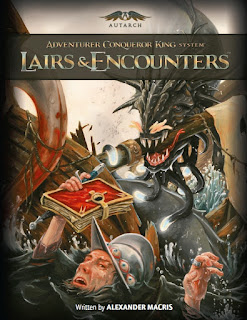 Lairs & Encounters - Nominally written for ACKS, L&E is chuck full of adventure seeds, seedlings and full grown (if small) adventures - well worth the 7 bucks - "Lairs & Encounters™ is the ultimate supplement for fantasy RPG sandbox campaigns. Designed for use with the Adventurer Conqueror King System™ (ACKS™), it is readily compatible with other fantasy role-playing games built on the same core rules - More than 165 ready-to-play monstrous lairs— one for every major monster in the Adventurer Conqueror King System. The lair listings are designed to be used both as dynamic points of interest that can be discovered while wandering through the wilderness and as obstacles to a would-be ruler’s attempt to secure land for a domain - A cartographic compendium of 36 lair maps for the Judge’s use and 6 treasure maps to hand out to your players - A catalog of 30 new monsters, including the chaos hulk, child of Nasga, dire beastman, draugr, desert ghoul, hag, khepri, and mummy lord - New subsystems for sandbox play, including rules for populating 6-mile hexes with lairs based on the terrain and extent of settlements in the region and rules for searching for lairs in the wilderness, factoring in terrain density, aerial reconnaissance, splitting up to cover more ground (never split the party!), and more - Additional mechanics for monsters, including ability scores for monsters, proficiencies for monsters, and young monsters." $10.00  $7.00 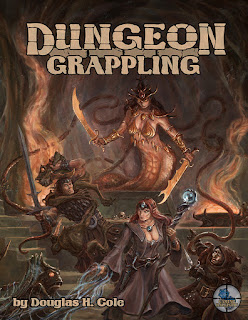 Dungeon Grappling - if you are anything like me, the first thing to get jettisoned from the AD&D 1e rules was unarmed combat and grappling. No one could get it done right it seemed - until now -"From the first story ever told, to tales on the silver screen. They all have at least one thing in common: Grappling. Grappling is thrilling, dangerous, and drives thousands of years of epic storytelling. Dungeon Grappling brings those thrills to the oldest fantasy RPG with rules and examples for Swords and Wizardry (and other OSR-style games), the Pathfinder Roleplaying Game, and 5e. Dungeon Grappling provides: Simple, unified mechanics, using the same concepts as weapon strikes - Variable outcomes – grapples can be good or bad - Dynamic, tense stories - Weapons, talons, magic . . . they’re all in here. - Grappling just got scary again! -  this book contains rules based on Open Gaming License content from several editions of the industry’s most popular RPG – explicit examples for Swords and Wizardry, the Pathfinder Roleplaying Game, and Fifth Edition." $9.49  $6.64
Posted by Tenkar at 3:45 PM