OSR Picks for the GM's Day Sale - Part I

Yep, its time to make some OSR Picks for the current GM's Sale at RPGNow. 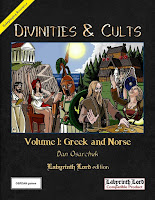 Divinities and Cults - "The powers of the Gods are mighty and mysterious, and so should the powers of their clerics be! Want to bring back some of that old-time religion to your Old School Roleplaying game? You will find 15 Divinities and 4 Demon Lords for Players, Referees, & Fans of Mythology" I love stuff like this in my games, even if just for inspiration. $4.99  $3.49 DCC RPG version here.

Bearing A Grudge - Released in various OSR editions, the link goes to the Swords & Wizardry version. "The Two Sisters Trading Post needs some genuine help. Deep in the forest, it is running out of supplies as kobolds, bandits, and even wild animals attack the travelers and traders on their way to and from it. If something isn't done about this soon, then the trading post is going to have to change its name or get into another line of business. Of course, that's assuming that the trading post itself doesn't become a target of some of the attacks..." There are other OSR adventures in the line.  $4.99  $3.49 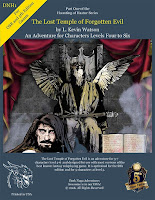 The Lost Temple of Forgotten Evil - written with both OSR and 5e stats, for characters level 4 to 6. "The small town of Boldon, and its surrounding villages are afraid. Dozens of people are missing, some speculate lost to some nefarious purpose. A broken drunkard tells fantastic tales of an evil temple and the horrible things within. The rare few who know the legends and history of the region are beginning to think the dark times have returned; not seen since the fall of the first age of man. People are beginning to feel the icy fingers of fear closing in. The party becomes aware of these events and is inspired to investigate. This leads them to a broken man who tells them a story of a lost temple. Has it been rediscovered by men seduced by its forgotten evil? The drunkard’s tale leads to others who might help the party discover more before they face The Lost Temple of Forgotten Evil." $6.95  $4.86 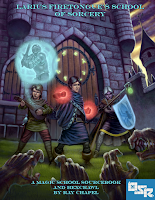 Larius Firetongue's School of Sorcery - A Swords & Wizardry Hack - "Corridors filled with robed apprentices. Their companions creatures both natural and conjured from worlds beyond worlds. Classrooms of bubbling cauldrons and summoning circles holding things and fiends most foul. Fantasy academia where tomes penned by inhuman scribes grant unending power. Where duels between mages are fought with spell, wand, and spectral blades."  $9.99  $6.99

Skyscrapers & Sorcery White Box Rules Players Guide - A Swords & Wizardry White Box hack - "Strange things live in the shadows of the world. Other worlds seem to have intruded upon ours and you are one of the few who decided to take notice and take action. Folks have names for people like you, the most polite of which is Adventurer. There is something that makes you want to notice the world and what goes on outside the daily humdrum lives of everyone else, and you have an itch to explore the dark corners and possibly even right some wrongs." $3.49  $2.44

Gramma World - A Swords & Wizardry White Box hack - "As a parody inspired by a gonzo post apocalyptic adventure I couldn’t resist creating a setting of elderly people trapped in a world they never made. The dungeon crawl explorations and strange familiarity of the mutants of Gamma World fit nicely with this conceit. When asked to describe the influences and flavour of this game I would consider it an amalgam of Scooby Doo Mysteries meeting the Golden Girls." Note - I need to do a review of this release. I have read a bit of it and it is awesome. $5.99  $4.19

Advanced Adventures - Expeditious Retreat Press' series of OSR releases. Its really had to go wrong with anything offered by +joseph browning .