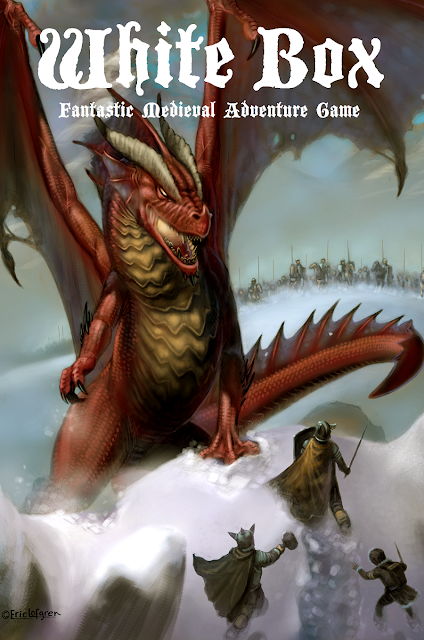 I've had more than a few people ask me "why haven't you posted about Charlie Mason's excellent houserules / rewrite of Swords & Wizardry White Box?" My answers were always the same. While working on Swords & Wizardry Light, effectively a strip down of S&W White Box, I did not want to find myself being influenced by another's work. Sure, Charlie was expanding upon White Box and I was distilling it but I didn't want to find myself with some sort of "criss contamination." That's probably too strong a phrase, but I suspect you know what I mean.

We took fairly similar approaches to the thief class (which isn't even in Matt Finch's original WB), which was to do away with the percentage chart and go with a d6 for thief skill resolution. Surprisingly, the Light version of the rules broke out a few of the skills whereas FMAG ties them all up in a single bundle. Funny how that all works out.

There is nothing horribly new in FMAG, but at the same time there is nothing that will turn off your average S&W / OSR gamer. It's a fresh coat of paint to a familiar set of rules and it adds some new life to a well worn ruleset.

Here's a list of changes I lifted from Charlie's blog:

Changes:
Modified the Sleep spell, like victims HD
Other small changes here and there, for example; with Clerics Charlie changed the reason for only being allowed blunt weapons to secret religious practices rather than being forbidden to shed blood.

Remember, all purchases using The Tavern's RPGNow affiliate links puts 5% of your purchase price into The Tavern's coffers. Don't leave that money on the table for the greedy corps! Tip your barman!  ;)
Posted by Tenkar at 9:02 AM