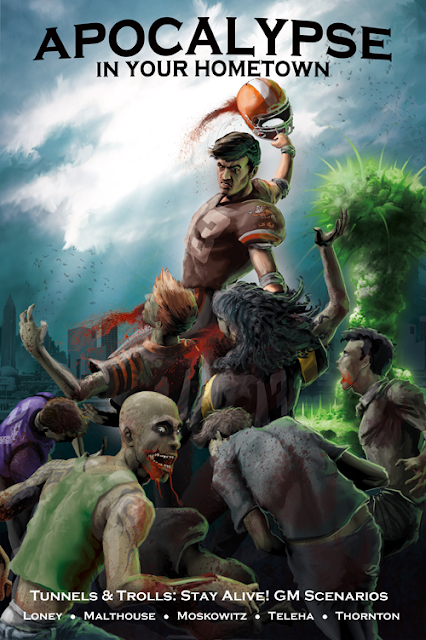 Yes, I damn near missed this.

Stay Alive!: Apocalypse In Your Hometown is a collection of GM adventures (not solos) for the Stay Alive! modern rules variant for Tunnels & Trolls.

I had no idea this even existed.

156 pages, which includes a Stay Alive! RPG Lite rules edition - so, for $2 you get a bunch of scenarios and the rules to play it with.

Just over 2 hours to go. Where was I yesterday?


The end is nigh in Cleveland, Ohio. Molly Hatchet still hasn't made it into the Rock and Roll Hall of Fame. England has been thrust into a new dark age as survivors in Leeds confront terrors that were previously thought to be only legends. Hippie, hipster and horror: who dwells on the Venice Beach Boardwalk after the twin tidal waves of gentrification and elder sorcery? A new pandemic races across the globe and a vaccine has been rushed to market to ease public concern, but can survivors in Toledo, Ohio deal with a new problem that has developed? And on the other side of the world in Auckland, New Zealand, global problems and catastrophes are inflicting massive changes to the world that we know.

Apocalypse In Your Hometown is a collection of GM scenarios designed for use with the Stay Alive! modern rules variant for Tunnels & Trolls™, a trademark of Flying Buffalo Inc., created by Ken St. Andre, and used with kind permission.

A copy of the Stay Alive! Lite Edition rules is included in the text of this edition.
Special Note: Some proceeds earned from each PDF sale of 'Apocalypse In Your Hometown' will be donated to the Jeff and Raquel Freels Transplant Fund.

Email ThisBlogThis!Share to TwitterShare to FacebookShare to Pinterest
Labels: deal of the day, Tunnels and Trolls