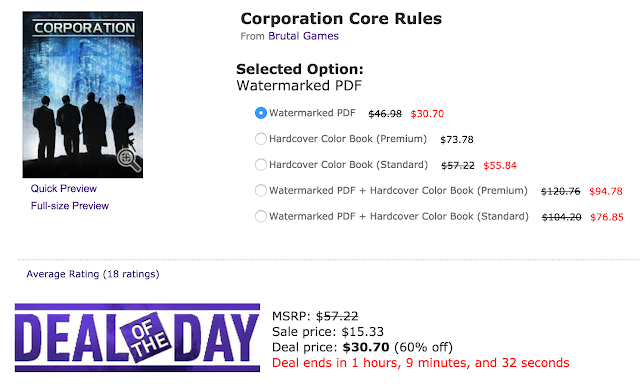 Corporation was released on RPGNow in May of 2008.

Feel free to charge $47 for a seven year old PDF, but marking it down to 31 bucks does not make it the Deal of the Day. And don't anyone say "It's $47 because of all the pages!" 256 pages is pretty standard for a game book these days and 31 bucks is still overprices by about a factor of three.

This Deal of the Day shit seems to be a way to squeeze some extra cash out of old, overpriced RPGs. Sure, there have been some exceptions, but they have been few and far between. Most of it is "Here's some old shit you didn't want before but maybe you'll want now!"

Still, I guess Corporation is as good a title as any for organized robbery ;)

(edit - they are figuring the sale price from the Hard Cover price, not the PDF)