So, You Said You Wanted Original Art, Pre-Production Minis and More in Santa's OSR Christmas Sack of Holding?

Christmas of 2013 is going to be a very, very special time in the OSR corner of our hobby. While others fret about the latest 4e/ pre-5e release from WotC or making sure their stocking gets stuffed with Pathfinder miniatures that aren't duplicates, over here in the OSR we have Santa's Multi-Dimensional Sack of Holding. I'm not sure how we can fit even more in, but we're doing it. 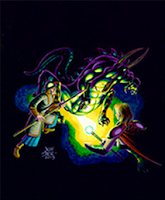 Last chance to add to the list (unless we have communicated prior) will be this coming Friday, 11/29.

Today's gifts are courtesy of +Zach Glazar , he of the Whisper & Venom Kickstart. There are some very unique items that Zach is donating for OSR Christmas Giveaway:

- A giant map from the Whisper and Venom Kickstarter

- the prototype minis (5) (4, as I'm keeping one ;) from the Whisper & Venom Kickstarter (these are truly limited)

- is a piece of original art by Lloyd Metcalf (giant spider)

-  number 17/20 of the limited edition Jeff Dee print of the cover of Whisper & Venom, signed of course

- and some other odds & ends

yeah, i think a Stamps.com account is going to be needed ;)

- The Witch in PDF (donated by +Timothy Brannan )

- 5 PDF copies of That's a Goblin!? donated by +Mark Chance

- print copies of TM1 The Ogress of Anubis and VA1 Valley of the Five Fires donated by Rich "New Big Dragon" - Rich will be mailing via Lulu and will eat the shipping cost for international recipients, so he is double generous :)

The list is STILL growing - it will be updated as needed when more stuff is nailed down.
Posted by Tenkar at 11:56 AM