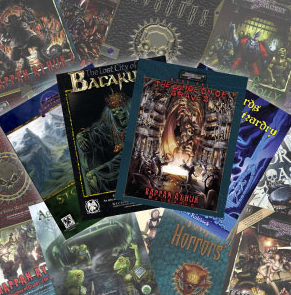 +Bill Webb updated the backers of recent FGG Kickstarters with info on some of the more unique loot available to those that dive in on the Frog God Games grab bags:

It's time to clear out the FGG warehouse. We need to make room for new books, and Mama Frog says the old stuff must go! We want everyone to promise they will not open these until Christmas (ok, Hanukkah is ok too), and we want to hear who got what in the boxes. You could be the lucky one who nets a Wilderlands Box set or even a Rappan Athuk Reloaded in one of these!

Bill has enlisted the aid of Baby Frog, Lil' Frog and Mama Frog to gather up odds and ends from the past 15 years to pack it all up and offer it to you at clearance prices. You see, even 1 book still takes up shelf space in the warehouse, and its time to clear those shelves. For Black Friday, we are assembling 200 grab bag orders (first come first served). The grab bag orders will consist of 200 boxes of each type--$29.99 (medium priority box) and $99.99 (large priority box). Boxes will contain random items from FGG and Necromancer Games with a retail value of at least 3x the cost. Many items will be out of print, exclusive or even rare. Boxes may contain items including dice, t-shirts, maps, Kickstarter bonus items, miniatures, cards, modules and hardcover and softcover books. You could probably double your money (at least) on Ebay. We just don't have time for that.

All boxes will contain randomly selected material from the past 15 years. That includes the low press run Troll Lord Games and Kenzer-distributed Necromancer Games modules from the early 200o's. A few ultra rare items will be included at random within the boxes. The Frog's will pack and seal all the boxes before they ship and we will not know who gets what box contents. All items are new condition, some may have a bit of shelf wear--as they are up to 15 years old.

Ultra rares and unusual items going into these boxes include but are not limited to: Wilderlands of High Fantasy Box set (shrink) including all 18 maps! - Copy of Rappan Athuk Reloaded (shrink) 2 copies of Crystal Skull (only 500 made, all files lost) - 2 copies of City State of the Invincible Overlord (including map) - 2 copies of Caverns of Thracia - Tome of Horrors original printing - 2 copies of the signed Gencon only release of Slumbering Tsar 1 (only 251 made) - 2 copies of Bill's Rappan Athuk notes - 2 copies of Nick Logue's Razor Coast notes - A staff copy (10 made) of the Rappan Athuk leather Edition, custom illustrated - Out of print Mythmere Games books (deskbooks, Ice Tower of the Salka original press, etc.) - Level 7B and Call of the Frog God Kickstarter exclusive modules (not for sale normally) -  Kickstarter only Orcus and Tsathogga Miniatures by Reaper - Copy of Vault of Larin Karr -  4 copies of the Lost City of Barakus, including the fold out map - Copy of Rappan Athuk 3 (original press)  - Copy of Tomb of Abysthor (original press) Note, these items are hard copies only, and no pdfs are provided.

All boxes will ship priority mail with overpack boxes inside to ensure safe delivery (hence the extra cost over standard priority rates--we have to pay for those inner boxes, and we cannot have your Crystal Skull arrive damaged!) and will be sent over the next 2-3 weeks.

Multiple orders are allowed. The problem is even 1 copy of a module takes up a box space on the shelves---so I am clearing out a great many of these. The Kenzer books were either 500 or 1000 total made, and the TLG press books ran in the 500-2000 print range total--10-14 years ago. This may be the last and only opportunity to get copies of many of the old oop Necromancer titles. Opened copies of Wilderlands are going for over $300--one or two lucky folks are gonna score.

There also may be a surprise or two tossed in from my personal collection (I have extras of some VERY rare early 1980's and late 1970's stuff). That's why I want people to post on the FGG forum with what they got. A few folks are gonna win the lottery--the rest will get at least 3x value, and I'll have space to store the next few books we make. Everybody wins.

As I said in yesterday's post, I'm in for the $100 grab bag. Anything that I get that is a duplicate of something I already own will be offered up in an upcoming contest here at The Tavern. That would include The Wilderlands Boxed set or any of the recent Kickstarters of the Frogs I've supported. We (more than me) have an idea for a contest to kick of the New Year with a bang :)
Posted by Tenkar at 10:39 AM