Gaming in the 'Verse: a Firefly RPG Preview Pre-Order - I Need To Know "Why Should I Pay $18 For a PDF Pre-Order?" 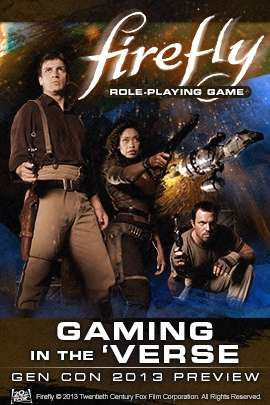 Want a PDF that apparently lacks Quickstart Rules, so you still have to wait even further to actually use the included adventures?

Well, Gaming in the 'Verse will fill those needs for you! Pay now and wait over 3 months to see the good s- $18 for a PDF that is meant to sell a game in 2014. Wait, if it's meant to make future sales, why are we paying 18 bucks for it at all?

Lose the Marvel Heroic license and expect us to pre-order a PDF for 18 bucks that we won't see for 3 months? Seems like a money grab, but then I am a pessimist.

Hey, I love Firefly, but this seems seems less than honest, and reminds me of those D&D 3E preview books that made cash for Wizards and offered little in return.


Gaming in the ‘Verse: Gen Con 2013 Exclusive is a Firefly RPG convention special that will debut at the Margaret Weis Productions booth during Gen Con: Indianapolis from August 15 through the 18th.

This PDF pre-order is for the digital, full-color version of this exclusive and will be available to fans worldwide. Gaming in the 'Verse will include preview material that will be expanded upon and published in the upcoming Firefly Role-Playing Game based on the popular Fox television series created by Joss Whedon.

All game material provided in Gaming in the 'Verse: Gen Con 2013 Exclusive will employ the Cortex Plus mechanic. The estimated release for the Firefly RPG is Winter 2013.

Both stand-alone Echoes of War adventures and the Serenity Crew characters will be available separately on DriveThruRPG.com in digital.

On the Thursday of Gen Con (August 15, 2013), you'll receive an email from DriveThruRPG telling you that your purchase is ready for download. To make sure you don't miss the notice, head on over to your account settings on DriveThruRPG and modify accordingly to make sure you can receive emails from Margaret Weis Productions. If that option is not to your liking, tick your calendar to access your DriveThruRPG library on August 15th and download away!