Never in my wildest imagination did I think it would take nearly three weeks to get through the posts from the S&W Appreciation Day Blogfest. Let me state it flat out - the real winners here are the Swords & Wizardry Community and the OSR at large. Everyone that participated added something, large or small, to our collective knowledge, and for that we will be forever grateful. Or at least, I will be ;)

As you probably already know, the prize committee consists of +Matt Finch , +Christopher Helton and myself. Surprisingly enough, we all had the same three blog entries in our top three, but the order of our top three wasn't the same. Still, it wasn't an easy thing to decide as there were so mang good and strong posts.

Without further ado, the winner of the First Prize, which consists of a PDF copy of The Razor Coast PDF for S&W and their choice of Rappan Athuk OR Monstrosities in PDF is: 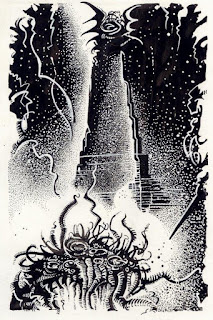 Mu: Notes For A Lovecraftian Fantasy Campaign Setting For Swords & Wizardry - congratuations! Look for an email from me ;)

The Second Prize winner, who will receive either a copy of Rappan Athuk or Monstrosities in PDF is:

The Basic Illusionist - i'll be contacting you via email once i get a response from the first prize winner, to let you know what your options are.

The Third Prize winner, who will also receive a copy of either Rappan Athuk or Monstrosities is:

Swords, Wizardry and Firearms! - Dak, you'll be contacted via email after I have worked out details with the first two prize winners.

The above prizes were donated by Frog God Games. All hail the Frog God! ;)

Additionally, there are some gift certificates I need to give away - I'll post that up later today.

Congrats to all!
Posted by Tenkar at 1:36 PM