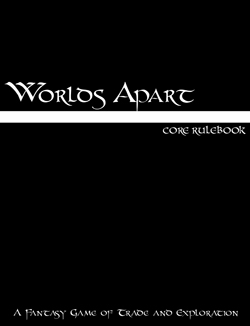 Last and certainly not least, I present Worlds Apart, an RPG that puts "fantasy" into the Traveller RPG engine.

Isn't releasing a game under an OGL an awesome thing?


Welcome, traveler, to Worlds Apart! Brave the Forever Sea in a fantasy game of trade and exploration. Take the role of soldier or sailor, entertainer or scholar, dweomercraefter or drifter. A thousand thousand islands populate the world and riches, adventure, and danger lurks upon every shore!

This is the sans-art, free version of Worlds Apart. Don’t forget to check out some of the smaller PDFs that expand and detail the world a bit more for the harried GM.

"Four islands composed the sultry chain, floating upon a bright blue sea under a tropical sun, each island gradually decreasing size as the eye passed from north to south. They were mountainous, etched with deep valleys, and covered with lush foliage. Greysolt surveyed the chain as best he could with his spyglass, taking the longest time upon the southernmost island, covered in a hazy steam of warm clouds. The crew of The Dromedary remained silent as the Captain surveyed what no other voyagers had ever seen. Each held different thoughts in the silence: thoughts of receptive natives, thoughts of fresh water and fresh fruit, thoughts of spices unknown to the civilized world, thoughts of slaughter and pillage.

The Dromedary calmly pulled into the bay and slowed to drop anchor. Two dinghies plopped into the water, and their crew descended into the rocking ships. Crossbows ready, the small craft rowed to the black sand shores. Behind the shores a seemingly impenetrable wall of vegetation dazzled in a multi-colored display. Now, to heed the call…"