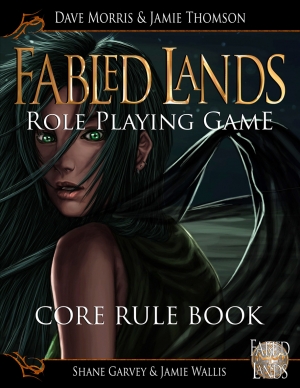 No, I'm not giving up on the idea of running a FATE Core / Dungeon World / another Indie styled fantasy game at some point, but probably not for the wife.

With the wife, I need something simple yet complete. Strangely enough, it looks like Fabled Lands will fit that bill. Maybe not so strange, as it was originally a solo system. A solo system that was sandboxie in nature apparently, as you could move your character between books. I'll let you know more about the original books, as they've been reprinted and I've ordered the first three at Amazon.

In any case, Fabled Lands has been released for full RPG style play, and I grabbed it in PDF from RPGNow for 10 bucks, and the first source book for 4 bucks.

I'm fairly impressed so far. Mind you, it's a simple 2d6 plus modifiers roll over system, so I'm not sure how happy I'd be running this as a campaign for my regular group, but for my wife it may just be what the doctor ordered.

Character creation is decently in depth for a system with a basic resolution system:

Your background, which is close to being akin to your social status, generally gives you a bonus skill (although Nobles get extra starting cash)

Description includes things like height and build (extremes can effect skills), personality traits (both good and bad), and optionally distinguishing features, birthplace and the like.

Ability scores are next up: Charisma, Combat, Intelligence, Magic, Muscle, Sanctity, Scouting and Thievery. So, abilities aren't strictly what we tink of them in the usual OSR game. Starting Scores range from 1-6 (12 is the absolute maximum). The player rolls 8d6 and assigns as they like. I suspect I'll let my wife roll 10d6 and drop the lowest 2 (in any case, if your total starting scores is less than 20, you may roll again)

Stamina (think HP). It's a d6+6 adjusted by backgrounds and character description if applicable.  It goes up as you level.

Last, you choose your profession, which gives the PC access to certain skills and powers. The classes are: Barbarian, Druid, Mage, Priest, Rogue, Troubadour (Did I ever mention that I love bards?), Warrior and Wayfarer (think Ranger).

Actually, maybe there is enough to run a campaign for a larger group here. I'll know more after the first solo arrives on Thursday.


The Fabled Lands Core Rule Book and source books are based on the game books written by Dave Morris and Jamie Thomson.

Harkuna is a world of mystery, intrigue and high adventure. Create campaigns and quests based in your favourite territories from the Fabled Lands: The War-Torn Kingdom of Sokara; the prosperous cities of Golnir (Cities of Gold and Glory), the Violet Ocean (Over the Blood-Dark Sea), north through the Spine of Harkun to The Plains of Howling Darkness, further west to The Court of Hidden Faces in Old Harkuna or east across the ocean to the Lords of the Rising Sun in Akatsurai.

The Role Playing Game has been designed using rules that are based on the original game book rules but have been expanded to achieve a party, role play experience. Within this Core Rule Book you will find: