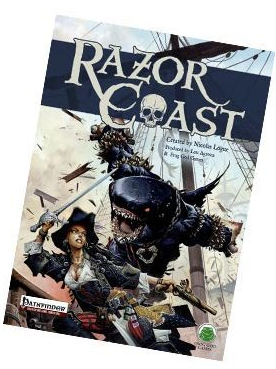 Yep, Nick Logue's (in)famous Razor Coast will actually be seeing the light of day. I'd like to say I'm excited by the whole thing, but this is one of those projects that showed the dangers of preordering from a start up publisher - money was taken the the project never released (that's the 30 second summary - I'm sure there are far longer write ups of this drama on the interwebs).

Frog God has stepped in to clear out the mess and has taken upon itself the responsibility of fulfilling any of the original outstanding orders. That's mighty big of them, but the, so is the buy in for the Razor Coast Kiskstarter. At these prices, I'd expect a reach around at the very least.

$30 gives you the Razor Coast Player's Guide in print and PDF - not so bad until you blink and realize it's ONLY a player's guide. It's not the setting. It's not what you need to run the game, it's same fluff and the like for player's to read and maybe offer some further inspiration for the DM. Still, on it's own, useless to run a game in the setting.

You want a Hard Copy of the Razor Coast Adventure? Just $110, but hey, they throw in a PDF of it too (if you want a copy of the Player's Guide, you need to add another $20 - so it's $130 for both, presumably both in print and PDF)

$150 gets you signed and numbered HC of the Razor Coast Adventure, a HC of the Player's Guide and PDFs of both.

After $150 it just gets silly and ridiculous. Heck, $40 for the PDF of the adventure only is obnoxious. How much of the jack up in prices is to cover the initial fuck up with the original preorders?

I want to like the idea that The Razor Coast is finally being released. I want to be excited. I'm not. I can't be.

"We estimate the final book will come in over 250 pages, delivered in 100% full color, tightly bound with our infamous stitched-bound hardcovers".