Soon to Enter The Fabled Lands - Cities of Gold and Glory 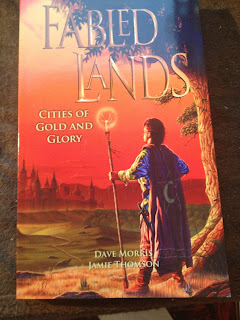 So, after checking out the Fabled Lands RPG (I still have much to read but like what I see so far) I quickly picked up the six reissued solos from the late 90's on Amazon. Endless quest books these are not.

Regretfully, of the six books, the first in the series is of course the one delayed, but Cities of Gold and Glory seems to be a decent one to start with (and is the one that was used for the Fabled Lands iPad app). You start at Rank 2, which is fairly low level. I just hope the rest of the adventure remains mostly low and survivable ;)

So far I've just briefly checked out a keep and found some armor - not dead and I've got some loot!

All of which means I may not get a chance to run with this or Legend until Sunday at the earliest (tomorrow night is out as we have some Drinking Quest lined up). Still, I'm excited to play a solo RPG that allows play between books. I'd also like to see the Fables Lands system in action. Hopefully Sunday.
Posted by Tenkar at 9:38 PM