Holy Crap! Kevin Crawford is Doing a Kickstarter - Spears of the Dawn! 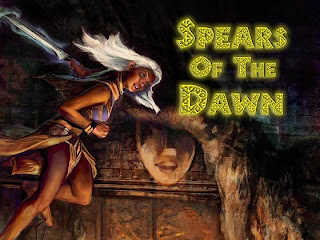 What? You don't know who Kevin Crawford is? Take a moment and download Stars Without Number: Free Edition. I'll wait...

Take a peek at it yet? Quality is written all over it.

Now take a look at the Spears of the Dawn Kickstarter, an African-inspired old-school RPG from the maker of Stars Without Number.

Kevin and his artists are going to donate the artwork from this project to the public domain, for other creators to use as they see fit, to encourage creation.

More importantly to me, it's going to be bring magic and spells to the system behind Stars Without Number.

From my end, I've yet to see Kevin put out less than an excellent product.

Some of Kevin's words from the Kickstarter:

Spears of the Dawn is intended to be an encouragement to other indie game designers. For decades, we've heard the common wisdom- "African games don't sell," people say. "People can't identify with African character art." "Medieval Africa hasn't got the variety and flavor of medieval Europe." "Players aren't comfortable with an African-flavored setting."

I've just laid down a $3,000 bet that the common wisdom is wrong. I've written this game, commissioned the art, and already paid out $1,800 of the budget in art costs. I've brought on the superb artistic talents of people like Nicole Cardiff, Luigi Castellani, Earl Geier, Andrew Krahnke, and Ian MacLean. I've gone to the sources, looked at the histories, checked out the mythology, and I can say with perfect confidence that medieval Africa provides amazing material.

Everything old-school gamers ask for in a setting is right there for the taking. Monstrous foes, glorious ruins of vanished ages, scheming nobles, brooding kings in splendid regalia, sorcerous cults plotting evil in the wilderness, mighty warriors with magnificent panoply, even red-handed amazonian warrior-women famed for their martial prowess. It's all there, and it's crying out to be enjoyed at your gaming table.

Too often I've seen people complaining online that our hobby doesn't do enough with this kind of material, that the art and settings we build are too often rooted in faux-European settings that waste the wonders of three-quarters of the world. In a former age, it might've been necessary to chivvy some big gaming company into providing less pedestrian material, to convince them to turn their presses and artists toward a different set of topics. Maybe in the past, it was necessary to wait for them to give us what we ask for.

Not any longer. We have the presses now. We have the links to the artists, the connections to the storefronts, the tools we need to make our own games about the things we think are worth emphasizing. We can make it and we can sell it and we can show the world just what we're talking about when we say that something is great and deserves more attention. I'm committed to encouraging this in other one-person publishers like myself.

Because of this, all the artwork in Spears of the Dawn will be released into the public domain. Use it for your own games. Use it for your supplements, or blog posts, or character art, or anything else. Make a new game with it, a better game, and sell it as you can. Show the rest of the hobby what great stuff you've got. I'll even throw in the blank InDesign templates I used for Spears of the Dawn so you can fill them up with your own game or take them apart for your own purposes. Just show us something great.

I'm committed to this project. The game is written and in draft layout right now. I've gotten about a third of the art already finished and in place. I've paid my money and now I'm taking my chances. Is there really an interest in African-flavored fantasy gaming? Are people really interested in seeing African-inspired characters and settings in their game art? I'm betting that the answer is yes, and that Spears of the Dawn can show people just a little of what they've been missing.