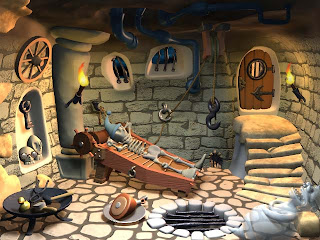 It's not easy to design a viable adventure - or is it?

Heck, the 1st Edition Dungeon Master's Guide has a whole section on building and stocking dungeons randomly. I used to bring that, graph paper and dice to holiday dinners and my aunt's house as a kid - I'd usually have a dungeon level completed before we sat down for soup. The fact that the dungeon levels sucked and made no sense didn't matter to me at the time - I'd followed the word of the "good book" and therefore the results must be good.

Ever notice that EGG himself rarely followed all of the rules in the books that he published. The rules he used at his own table were not the strick interpretation that the masses were supposed to follow.

There is something I'm always reminded about on my job that to me dovetails nicely into AD&D / D&D. On my job we have a "Patrol Guide". When the "Job" wants it to be, it's just a guide, but when they want to screw someone, it's suddenly "rules and regulations" - but the simple fact is it is a guide. It's there to help you, direct you, guide you - but little if any is written in stone.

Falling back upon a strict interpretation of guidelines while designing your adventure - whether its a sandbox, wilderness, town, dungeon - whatever,  is "painting by the numbers". I did that a a kid. It was not art.

Designing an adventure beyond the guidelines and safety rails is that first step toward becoming art. Maybe not in the traditional sense, but it is art.

Vornheim is not a gaming product that I personally enjoy much, but it is certainly art. Not just because of the amount of art in it, but for the innovations that Zak brought to it - with his use of maps and running city adventures and whatnot. Zak didn't feel confined by a set of guidelines.

If the guidelines say something that doesn't make sense (I'm talking to you Mr Giant Rats and your 20% chance of having 1,000 to 12,000 CP in your lair!) change the shit up. Or find a reason to make sense of that which fails to make sense.