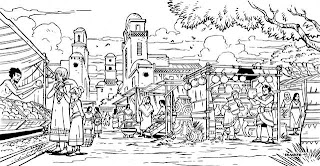 A few weeks ago I looked at my history of supporting crowd funded (Kickstarter & Indiegogo projects) and I realized an important fact - this shit is like crack. You start small and before you know it you need a bigger and bigger rock to get the same high.

I mean, why did I support a Stock Art project at the highest amount if I'm not even a publisher? Because of the gawddamn high. I think I needed the high. Why support a project at a level to get two vinyl maps - when I do 100% of my gaming via G+ Hangouts? I needed to reach that high ;)

Believe it or not, I've cut back my funding of these projects greatly - not because the new projects aren't worthy, but because of the amount of cash I have tied up in projects that have blown past their due dates and then some. I expect all of them to get completed at some point, but paying now for something I may, if I'm lucky, get a year from now - again and again - is something I'm trying to curtail.

For me, Spears of the Dawn, which I mentioned earlier today, has a few good things going for it, but the most important is that the low art (but complete) PDF will release at the completion of the Kickstarter. No longer do I have to wait 2d6 months (doubles are rolled again and added to the previous roll) to actually get to enjoy at least part of what I'm paying for.

Holy shit, a novel concept - actually have stuff ready for your supporters when the Kickstarter comes to an end.

Kevin, I hope you are a trendsetter, but not just for breaking out of the traditional fantasy mold, but for crowdfunded projects. Uhm, hopefully you actually get the low art PDF out on time, or you'll just kill this addict ;)
Posted by Tenkar at 10:13 PM