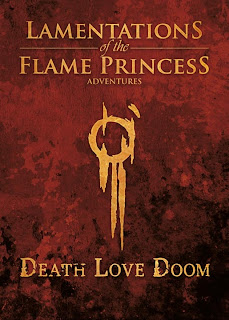 Let me be blunt - Death Love Doom is a NC-17 adventure. The art makes it obvious, but even reading (let alone planning out the way to run it in your head) is disturbing and personal. Which, admittedly, is what James is going for.

For Death Love Doom to be effective, it has to be unnerving and uncomfortable to not just the PCs, but the players as well. In truth, for that to happen, the GM is going to have to be a bit unnerved by the whole thing himself.

At it's simplest, Death Love Doom is a haunted house type of story. As such, it is dying to be used as a sort of Halloween type gaming session. I used to use Ravenloft one-shots for that stuff back in the day, but this - this would have been the "piece de resistance". Nothing would ever top it. That being said, I don't think I'd find players who would want to run it, or something like it, a second time. Once is probably all that any has in them.

If I have one complaint, it's the art. Not that it's bad - it is amazingly well done and horribly disturbing. My complaint is that it is interspread throughout the adventure and there aren't second copies in the back. These should be handouts or visuals for the players, because as we've been told numerous times in our lives - "A picture is worth a thousand words."

Here, I'll give you a small piece of one of Kelvin Green's pieces: 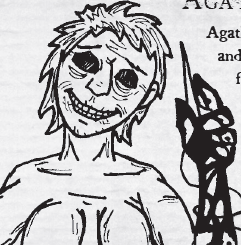 Uhm, yeah - it gets much more graphic. But that's worth at least it's share of a thousand words.

It's good though. A guilty good. Guilty good in "I'd love to run a group through this just to see if any 'tap out' before the end" ;)

Is it a thing of nightmares? Perhaps. I can't recommend this for everyone. This is graphic, emotional and   mental horror. If you aren't into that type of stuff, give this a wide berth.