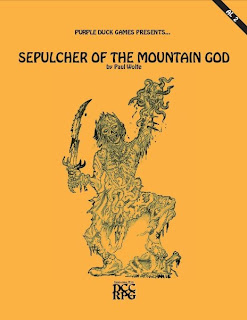 I've I had a "not quite final" copy of Sepulcher of the Mountain God in my possession for nearly two weeks, and I've been eagerly awaiting it's release so I could talk about it. That time is here.

First things first - I really love Scott Ackerman's artwork. He has some really nice B&W (actually lightly colored) pieces in this adventure. Scott's been doing some really nice pieces for different third party publishers of the DCC RPG and I've really enjoying what I'm seeing. I may need to commission Scott to do a new header for this blog ;)

SotMG is a 1st level adventure that puts the PCs directly on the radar of a God, which can only mean tons of fun, especially when one is playing the DCC RPG. This is an adventured steeped in atmosphere and combat - probably more direct combat that I recall in the other 1st level DCC adventures released to date. So it has the potential to be pretty lethal - I strongly suggest that a group with less than 6 players run with 2 PCs per player. This isn't a funnel, but it isn't going to be easy, either.

It should be playable in a single session, unless your players are the type that turn over every dust mote. In which case, it may take a tad longer ;)

If there is a minor quibble, its that the maps are fairly linear - not literally, but with few true PC choices to be made. Still, in a short adventure, this is to be expected

The inclusion of unmarked players' maps is an extra that I can't stop praising. The maps are nice and clean and perfect for use in a VTT. This alone adds a huge value to the adventure, especially if you DM online like I do.


Braving the hidden tomb of an ancient tribal king, the adventurers become embroiled in a quest directly from Ira, the Mountain God – find the Skull of Vyache and his magic club, Alceon, that were stolen by Bashkim and the twisted minions of Gelihedres.

Supulcher of the Mountain God is a Dungeon Crawl Classics Role Playing Game adventure designed for 8-10, 1st-level characters or can be easily adapted for use with higher or lower level characters.

All products in the Adventure Locale line present one or more dungeons that can be quickly picked up and used for a session of the Dungeon Crawl Classics Role Playing Game.