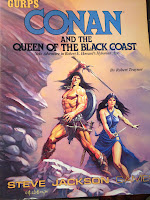 It's been a while since I've posted a Games From the Basement post, but I have a fun one tonight. We''re getting new bedroom furniture delivered tomorrow, so of course that meant more digging thru stuff that was buried away. 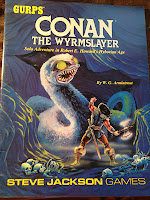 Tonight's find was not one, but two GURPS Conan Solos - Conan and the Queen of the Black Coast and Conan the Wyrmslayer. I can't for the life of me understand why I avoided Tunnels & Trolls solos back in the day, but I was willing to slog through GURPS Conan Solos - go figure. 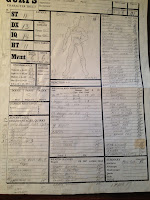 Heck, it looks like I even stated out my own character, because I hated using pregens - it just felt kinda pointless to use a character that was not your own.

Wow, these things even included combat maps. I'm pretty damn sure I never bothered with using that in a solo ;)
Posted by Tenkar at 11:39 PM

Email ThisBlogThis!Share to TwitterShare to FacebookShare to Pinterest
Labels: conan, games from the basement, gurps, solo