Mail From Finland - LotFP in the House! 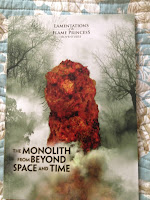 Just checked the mail and it seems my package from Finland has arrived. I was an Indiegogo supporter of The Monolith From Beyond Space and Time and I've had access to it for a few days now, but it is really nice having it in dead tree format. As I've said earlier, it's not an easy read as there is a crapload to absorb. Damn good stuff. 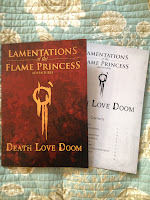 I've already posted a review of Death Love Doom, based on the PDF. I will say I like the fact that the cover is not attached in the print version, just like the classic TSR modules of old. The ability to easily reference the maps while reading the text is a godsend for nearly every adventure, and this one is no different. I do like the prominent 18+ Graphic James used on the back cover. 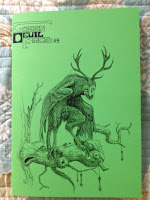 Green Devil Face #5 was added to the Indiegogo fundraiser for The Monolith. I've only now had a chance to flip through it, and t here are some fun alternate rules to play with. I think the next OSR style game I run will either be LotFP Weird Fantasy or Swords & Wizardry Complete. There is a bunch of usable tables and stuff in here. I'll give it a review later.
Posted by Tenkar at 6:12 PM