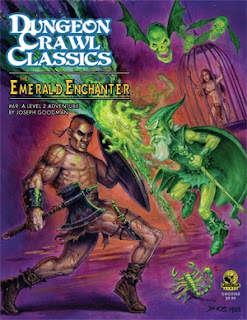 The Emerald Enchanter is the 2nd adventure released in the DCC RPG Line of adventures for 2nd level characters after Purple Duck Games' release of Bone Hoard of the Dancing Horror. If you are a referee that prefers to use prewritten adventures in your gaming, the DCC RPG is has the strong beginnings of a varied assortment to choose from.

I must say I'm really digging the adversaries in this adventure. The grunts have a nice twist to them. The more specialized adversaries? Awesome twists to them. I will never look at mosaic artwork the same way again. Ever ;)

The ability to work potential replacement characters into the adventure is in itself a great thing, especially with the potential lethality of the DCC system. I'm glad to see the author placed some replacements if needed. I'd suggest using the PC generator over at Purple Sorcerer Games and letting the player choose the best out of the four for his new PC if it comes down to this. Consider it an "off screen funnel" if you will.

The challenges are great, but so are the rewards. I think it is a pretty well balanced adventure, both in the challenge department and in the goodies the PCs might acquire. I think having a Wizard or an Elf in the party is pretty much needed for the party to succeed but I could be wrong. It's a shame I won't get a chance to run this until sometime in August at the earliest.

Oh, and the PDF is bookmarked as always. Nice job.

Villagers have gone missing! A mix of clues, superstitions, and omens point to the brooding citadel of the emerald sorcerer. This silent monolith has sat undisturbed atop a windy ridge for centuries. Legends say that a green-skinned sorcerer dwells there, where he conducts strange experiments and builds enigmatic machinery. His green-skinned constructs patrol the grounds of his citadel, and he is seen only rarely when he ventures out on nefarious errands that end in horrid screams and strange lights coming from his citadel. Now it is time to penetrate his inner sanctum…
Posted by Tenkar at 6:41 PM