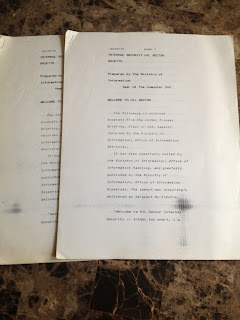 So, after getting home from work and walking the dog, I continued my quest to find some of my older dungeon maps. I thought I scored when I found a graph paper notebook, but most of the maps within were from one of the early Bard's Tale computer games for the Commodore 64. Not saying I didn't find anything useful, just not all that I hoped for. 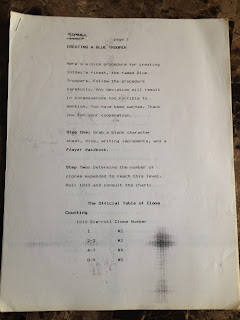 I did, however, find briefing material for the playtest of Hil Sector Blues for Paranoia 1E. I remember playtesting this in Manhattan way back in the day in the old West End Games offices late one Friday night. I have no idea who ran the session, but there were three playtesters - myself and my friends Andrew and Lenny. I guess someone didn't want their playtest material, as I have two copies of the Internal Security Hil Sector Gazette.
I think I'll add the second copy as a prize in one of this blog upcoming contests. This shit has to be at least as valuable as a Mark McGuire rookie card ;)
Posted by Tenkar at 6:38 PM

Email ThisBlogThis!Share to TwitterShare to FacebookShare to Pinterest
Labels: games from the basement, paranoia